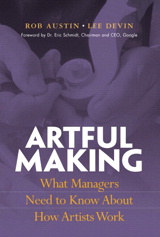 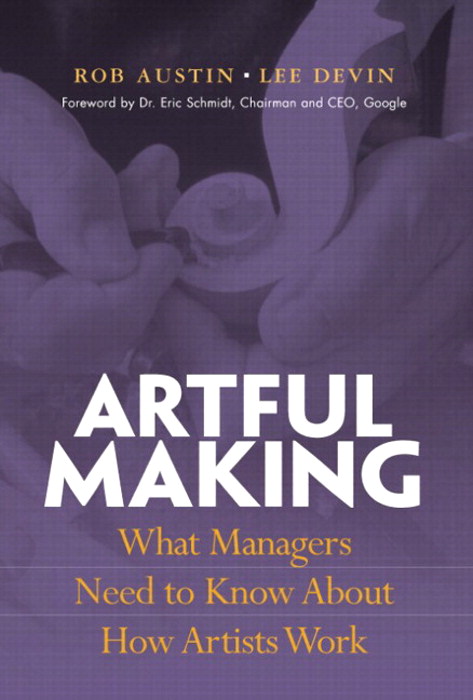 Artful Making: What Managers Need to Know About How Artists Work

Artful Making offers the first proven, research-based framework for engineering ingenuity and innovation. This book is the result of a multi-year collaboration between Harvard Business School professor Robert Austin and leading theatre director and playwright Lee Devin. Together, they demonstrate striking structural similarities between theatre artistry and production and today's business projects--and show how collaborative artists have mastered the art of delivering innovation "on cue," on immovable deadlines and budgets. These methods are neither mysterious nor flaky: they are rigorous, precise, and--with this book's help--absolutely learnable and reproducible. They rely on cheap and rapid iteration rather than on intensive up-front planning, and with the help of today's enabling technologies, they can be applied in virtually any environment with knowledge-based outputs. Moreover, they provide an overarching framework for leveraging the full benefits of today's leading techniques for promoting flexibility and innovation, from agile development to real options.


The People's Light Way of Working. Not Quite Experiment, Not Quite Discovery. Exploration and Efficiency. Emergence in Business.

3. Artful Making is Iterative, Not Sequential.


Auto Making: Mostly Industrial. Software Making at Trilogy: Mostly Artful. The Iterative Structure of Play Production. The Script Is Not the Play, Nor Is It a Specification. The Writer's View of the Script. Rehearsal Process. Agile Software Development. Artful Making in Software Development and Theatre. Iteration as a Structure for Rigorous Work.

4. The Prerequisite Conditions for Artful Making.

5. Artful Making as Part of the Shift to a Knowledge Economy.


Securing the Workspace. Edmondson's “Psychological Safety” Concept. Security Beyond the Workspace. Creative Interchange. Working on Your “Edge”. Finding a Physical Edge. Learning to Work on Your Edge. Ego versus Vanity: Giving up Sovereignty over Your Work. Making an Ensemble. Two Kinds of Reality. A Whole Greater than the Sum of its Parts.

9. Artful Making Embraces Uncertainty Instead of Protecting Against It.


A Last Look at the Theatre.