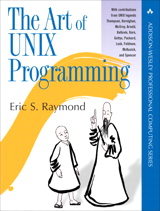 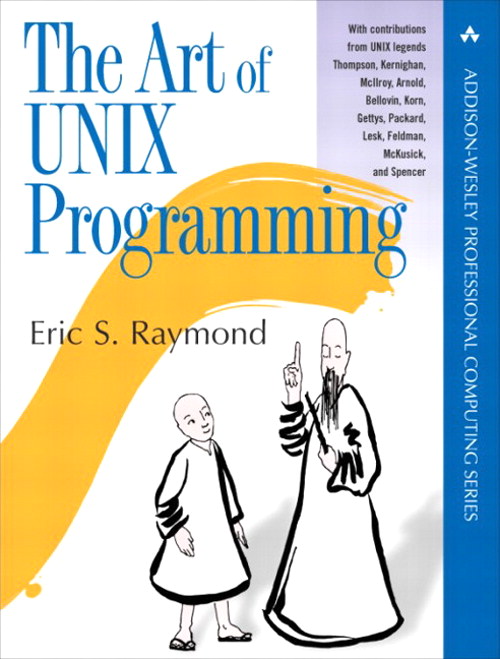 Art of UNIX Programming, The

"Reading this book has filled a gap in my education. I feel a sense of completion, understand that UNIX is really a style of community. Now I get it, at least I get it one level deeper than I ever did before. This book came at a perfect moment for me, a moment when I shifted from visualizing programs as things to programs as the shadows cast by communities. From this perspective, Eric makes UNIX make perfect sense."
--Kent Beck, author of Extreme Programming Explained, Test Driven Development, and Contributing to Eclipse

"A delightful, fascinating read, and the lessons in problem-solvng are essential to every programmer, on any OS."
--Bruce Eckel, author of Thinking in Java and Thinking in C++

In this book, five years in the making, the author encapsulates three decades of unwritten, hard-won software engineering wisdom. Raymond brings together for the first time the philosophy, design patterns, tools, culture, and traditions that make UNIX home to the world's best and most innovative software, and shows how these are carried forward in Linux and today's open-source movement. Using examples from leading open-source projects, he shows UNIX and Linux programmers how to apply this wisdom in building software that's more elegant, more portable, more reusable, and longer-lived.

Taming Batch Operations Using Perl: A Tale of One Application, a Group of Users, Two Languages, and a Few Tools

The durability of Unix.

The case against learning Unix culture.

What Unix gets wrong.

What Unix gets right.

Basics of the Unix philosophy.

The Unix philosophy in one lesson.

The open-source movement: 1998 and onward.

The lessons of Unix history.


The elements of operating-system style.

What goes around, comes around.


The Importance of Being Textual.

Designing for transparency and discoverability.

Problems and methods to avoid.

Process partitioning at the design level.


What should be configurable?

How to choose among configuration-setting methods.

On breaking these rules.


Applying the Rule of Least Surprise.

History of interface design on Unix.

Tradeoffs between CLI and visual interfaces.


Don't just do something, stand there!

A Tale of Five Editors.

The right size for an editor.

The right size of software.

Trends for the Future.

Emacs as the universal front end.


The tale of J. Random Newbie.

Transparency as the key to re-use.

From re-use to open source.

The best things in life are open.

Where should I look?

What are the issues in using open-source software?

Specifications as DNA, code as RNA.

The zoo of Unix documentation formats.

The present chaos and a possible way out.

How to write Unix documentation.

The logic of licenses: how to pick one.

Why you should use a standard license.


Essence and accident in Unix tradition.

Problems in the design of Unix.

Problems in the environment of Unix.

Problems in the culture of Unix.

A. Glossary of Abbreviations.
B. References.
C. Contributors.