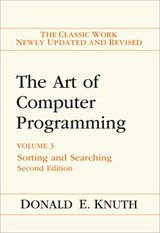 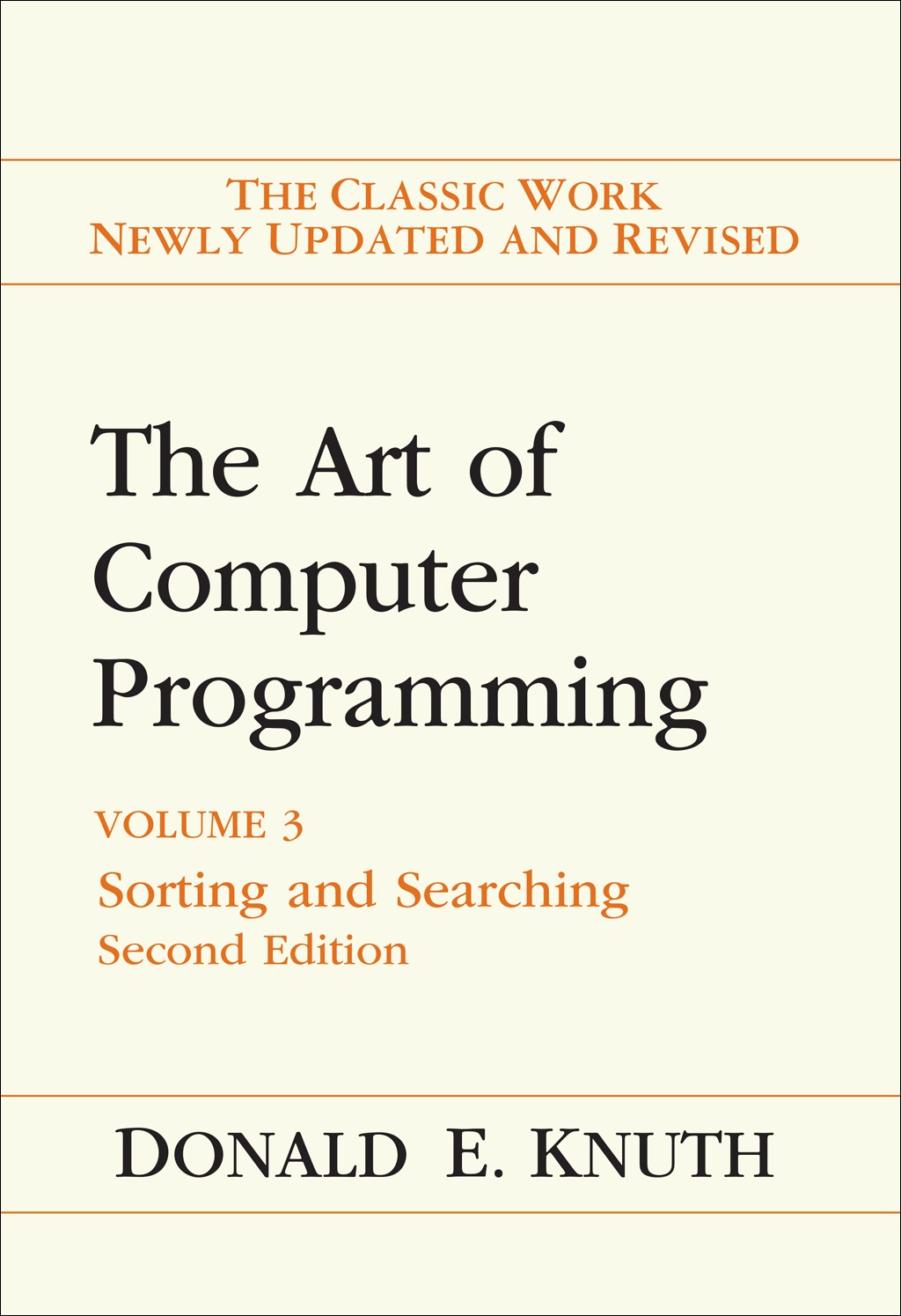 Donald E. Knuth was born on January 10, 1938 in Milwaukee, Wisconsin. He studied mathematics as an undergraduate at Case Institute of Technology, where he also wrote software at the Computing Center. The Case faculty took the unprecedented step of awarding him a Master's degree together with the B.S. he received in 1960. After graduate studies at California Institute of Technology, he received a Ph.D. in Mathematics in 1963 and then remained on the mathematics faculty. Throughout this period he continued to be involved with software development, serving as consultant to Burroughs Corporation from 1960-1968 and as editor of Programming Languages for ACM publications from 1964-1967.

He joined Stanford University as Professor of Computer Science in 1968, and was appointed to Stanford's first endowed chair in computer science nine years later. As a university professor he introduced a variety of new courses into the curriculum, notably Data Structures and Concrete Mathematics. In 1993 he became Professor Emeritus of The Art of Computer Programming. He has supervised the dissertations of 28 students.

Knuth began in 1962 to prepare textbooks about programming techniques, and this work evolved into a projected seven-volume series entitled The Art of Computer Programming. Volumes 1-3 first appeared in 1968, 1969, and 1973. Having revised these three in 1997, he is now working full time on the remaining volumes. Approximately one million copies have already been printed, including translations into six languages. He took ten years off from this project to work on digital typography, developing the TeX system for document preparation and the METAFONT system for alphabet design. Noteworthy by-products of those activities were the WEB and CWEB languages for structured documentation, and the accompanying methodology of Literate Programming. TeX is now used to produce most of the world's scientific literature in physics and mathematics.

His research papers have been instrumental in establishing several subareas of computer science and software engineering: LR(k) parsing; attribute grammars; the Knuth-Bendix algorithm for axiomatic reasoning; empirical studies of user programs and profiles; analysis of algorithms. In general, his works have been directed towards the search for a proper balance between theory and practice.

Professor Knuth received the ACM Turing Award in 1974 and became a Fellow of the British Computer Society in 1980, an Honorary Member of the IEEE in 1982. He is a member of the American Academy of Arts and Sciences, the National Academy of Sciences, the National Academy of Engineering, and a foreign associate of l'Academie des Sciences (Paris) and Det Norske Videnskaps-Akademi (Oslo). He holds five patents and has published approximately 160 papers in addition to his 19 books. He received the Medal of Science from President Carter in 1979, the American Mathematical Society's Steele Prize for expository writing in 1986, the New York Academy of Sciences Award in 1987, the J.D. Warnier Prize for software methodology in 1989, the Adelsk&oumlld Medal from the Swedish Academy of Sciences in 1994, the Harvey Prize from the Technion in 1995, and the Kyoto Prize for advanced technology in 1996. He was a charter recipient of the IEEE Computer Pioneer Award in 1982, after having received the IEEE Computer Society's W. Wallace McDowell Award in 1980; he received the IEEE's John von Neumann Medal in 1995. He holds honorary doctorates from Oxford University, the University of Paris, St. Petersburg University, and more than a dozen colleges and universities in America.

Professor Knuth lives on the Stanford campus with his wife, Jill. They have two children, John and Jennifer. Music is his main avocation.

The first revision of this third volume is the most comprehensive survey of classical computer techniques for sorting and searching. It extends the treatment of data structures in Volume 1 to consider both large and small databases and internal and external memories. The book contains a selection of carefully checked computer methods, with a quantitative analysis of their efficiency. Outstanding features of the second edition include a revised section on optimum sorting and new discussions of the theory of permutations and of universal hashing.

Preface to The Art of Computer Programming, Volume 3: Sorting and Searching, 2nd Edition

The Art of Computer Programming, Volume 3: Combinatorial Properties of Permutations

Permutations of a Multiset.

Searching by Comparison of Keys.


Appendix A: Tables of Numerical Quantities.

Appendix B: Index to Notations.

Cookery is become an art,
a noble science;
cooks are gentlemen.

This book forms a natural sequel to the material on information structures in Chapter 2 of Volume 1, because it adds the concept of linearly ordered data to the other basic structural ideas.

The title "Sorting and Searching" may sound as if this book is only for those systems programmers who are concerned with the preparation of general-purpose sorting routines or applications to information retrieval. But in fact the area of sorting and searching provides an ideal framework for discussing a wide variety of important general issues:

Indeed, I believe that virtually every important aspect of programming arises somewhere in the context of sorting or searching!

This volume comprises Chapters 5 and 6 of the complete series. Chapter 5 is concerned with sorting into order; this is a large subject that has been divided chiefly into two parts, internal sorting and external sorting. There also are supplementary sections, which develop auxiliary theories about permutations (Section 5.1) and about optimum techniques for sorting (Section 5.3). Chapter 6 deals with the problem of searching for specified items in tables or files; this is subdivided into methods that search sequentially, or by comparison of keys, or by digital properties, or by hashing, and then the more difficult problem of secondary key retrieval is considered. There searching related to sorting is a surprising amount of interplay between both chapters, with strong analogies tying the topics together. Two important varieties of information structures are also discussed, in addition to those considered in Chapter 2, namely priority queues (Section 5.2.3) and linear lists represented as balanced trees (Section 6.2.3).

Like Volumes 1 and 2, this book includes a lot of material that does not appear in other publications. Many people have kindly written to me about their ideas, or spoken to me about them, and I hope that I have not distorted the material too badly when I have presented it in my own words.

I have not had time to search the patent literature systematically; indeed, I decry the current tendency to seek patents on algorithms (see Section 5.4.5). If somebody sends me a copy of a relevant patent not presently cited in this book, I will dutifully refer to it in future editions. However, I want to encourage people to continue the centuries-old mathematical tradition of putting newly discovered algorithms into the public domain. There are better ways to earn a living than to prevent other people from making use of one's contributions to computer science.

Before I retired from teaching, I used this book as a text for a student's second course in data structures, at the junior-to-graduate level, omitting most of the mathematical material. I also used the mathematical portions of this book as the basis for graduate-level courses in the analysis of algorithms, emphasizing especially Sections 5.1, 5.2.2, 6.3, and 6.4. A graduate-level course on concrete computational complexity could also be based on Sections 5.3, and 5.4.4, together with Sections 4.3.3, 4.6.3, and 4.6.4 of Volume 2.

For the most part this book is self-contained, except for occasional discussions relating to the MIX computer explained in Volume 1. Appendix B MIX computer contains a summary of the mathematical notations used, some of which are a little different from those found in traditional mathematics books.

Preface to the Second Edition

This new edition matches the third editions of Volumes 1 and 2, in which I have been able to celebrate the completion of TeX and MF by applying those systems to the publications they were designed for.

The conversion to electronic format has given me the opportunity to go over every word of the text and every punctuation mark. I've tried to retain the youthful exuberance of my original sentences while perhaps adding some more mature judgment. Dozens of new exercises have been added; dozens of old exercises have been given new and improved answers. Changes appear everywhere, but most significantly in Sections 5.1.4 (about permutations and tableaux), 5.3 (about optimum sorting), 5.4.9 (about disk sorting), 6.2.2 (about entropy), 6.4 (about universal hashing), and 6.5 (about multidimensional trees and tries).

The Art of Computer Programming is, however, still a work in progress. Research on sorting and searching continues to grow at a phenomenal rate. Therefore some parts of this book are headed by an ''under construction'' icon, to apologize for the fact that the material is not up-to-date. For example, if I were teaching an undergraduate class on data structures today, I would surely discuss randomized structures such as treaps at some length; but at present, I am only able to cite the principal papers on the subject, and to announce plans for a future Section 6.2.5 (see page 6.2.5). My files are bursting with important material that I plan to include in the final, glorious, third edition of Volume 3, perhaps 17 years from now. But I must finish Volumes 4 and 5 first, and I do not want to delay their publication any more than absolutely necessary.

I am enormously grateful to the many hundreds of people who have helped me to gather and refine this material during the past 35 years. Most of the hard work of preparing the new edition was accomplished by Phyllis Winkler (who put the text of the first edition into TeX form), by Silvio Levy (who edited it extensively and helped to prepare several dozen illustrations), and by Jeffrey Oldham (who converted more than 250 of the original illustrations to METAPOST format). The production staff at Addison Wesley has also been extremely helpful, as usual.

There are certain common Privileges of a Writer,
the Benefit whereof, I hope, there will be no Reason to doubt;
Particularly, that where I am not understood, it shall be concluded,
that something very useful and profound is coucht underneath.

Stanford GraphBase, The: A Platform for Combinatorial Computing