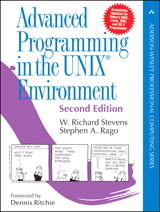 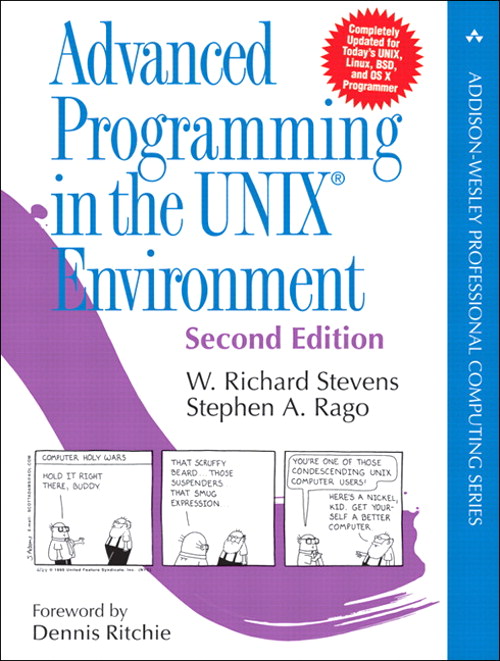 A major revision of the definitive guide to Unix system programming with sales exceeding 160,000 units!

° Describes and illustrates more than 200 system calls - the interface that programmers must master in order to access all major Unix internal resources.

"Stephen Rago's update is a long overdue benefit to the community of professionals using the versatile family of UNIX and UNIX-like operating environments. It removes obsolescence and includes newer developments. It also thoroughly updates the context of all topics, examples, and applications to recent releases of popular implementations of UNIX and UNIX-like environments. And yet, it does all this while retaining the style and taste of the original classic."

"One of the essential classics of UNIX programming."

--Eric S. Raymond, author of The Art of UNIX Programming

"This is the definitive reference book for any serious or professional UNIX systems programmer. Rago has updated and extended the classic Stevens text while keeping true to the original. The APIs are illuminated by clear examples of their use. He also mentions many of the pitfalls to look out for when programming across different UNIX system implementations and points out how to avoid these pitfalls using relevant standards such as POSIX 1003.1, 2004 edition and the Single UNIX Specification, Version 3."

"Advanced Programming in the UNIX® Environment, Second Edition, is an essential reference for anyone writing programs for a UNIX system. It's the first book I turn to when I want to understand or re-learn any of the various system interfaces. Stephen Rago has successfully revised this book to incorporate newer operating systems such as GNU/Linux and Apple's OS X while keeping true to the first edition in terms of both readability and usefulness. It will always have a place right next to my computer."

Praise for the First Edition

"Advanced Programming in the UNIX® Environment is a must-have for any serious C programmer who works under UNIX. Its depth, thoroughness, and clarity of explana-tion are unmatched."

"Numerous readers recommended Advanced Programming in the UNIX® Environment by W. Richard Stevens (Addison-Wesley), and I'm glad they did; I hadn't even heard of this book, and it's been out since 1992. I just got my hands on a copy, and the first few chapters have been fascinating."

"A much more readable and detailed treatment of UNIX internals can be found in Advanced Programming in the UNIX® Environment by W. Richard Stevens (Addison-Wesley). This book includes lots of realistic examples, and I find it quite helpful when I have systems programming tasks to do."

"This is the definitive reference book for any serious or professional UNIX systems programmer. Rago has updated and extended the original Stevens classic while keeping true to the original."

For over a decade, serious C programmers have relied on one book for practical, in-depth knowledge of the programming interfaces that drive the UNIX and Linux kernels: W. Richard Stevens' Advanced Programming in the UNIX® Environment. Now, Stevens' colleague Stephen Rago has thoroughly updated this classic to reflect the latest technical advances and add support for today's leading UNIX and Linux platforms.

Rago carefully retains the spirit and approach that made this book a classic. Building on Stevens' work, he begins with basic topics such as files, directories, and processes, carefully laying the groundwork for understanding more advanced techniques, such as signal handling and terminal I/O.

Substantial new material includes chapters on threads and multithreaded programming, using the socket interface to drive interprocess communication (IPC), and extensive coverage of the interfaces added to the latest version of the POSIX.1 standard. Nearly all examples have been tested on four of today's most widely used UNIX/Linux platforms: FreeBSD 5.2.1; the Linux 2.4.22 kernel; Solaris 9; and Darwin 7.4.0, the FreeBSD/Mach hybrid underlying Apple's Mac OS X 10.3.

As in the first edition, you'll learn through example, including more than 10,000 lines of downloadable, ANSI C source code. More than 400 system calls and functions are demonstrated with concise, complete programs that clearly illustrate their usage, arguments, and return values. To tie together what you've learned, the book presents several chapter-length case studies, each fully updated for contemporary environments.

Advanced Programming in the UNIX® Environment has helped a generation of programmers write code with exceptional power, performance, and reliability. Now updated for today's UNIX/Linux systems, this second edition will be even more indispensable.

The following download is a Supplemental Chapter from the book.

Visit the Author's Web Site related to this title.

Preface to the First Edition.

21. Communicating with a Network Printer.

Rich Stevens and I first met through an e-mail exchange when I reported a typographical error in his first book, UNIX Network Programming. He used to kid me about being the person to send him his first errata notice for the book. Until his death in 1999, we exchanged e-mail irregularly, usually when one of us had a question we thought the other might be able to answer. We met for dinner at USENIX conferences and when Rich was teaching in the area.

Rich Stevens was a friend who always conducted himself as a gentleman. When I wrote UNIX System V Network Programming in 1993, I intended it to be a System V version of Rich's UNIX Network Programming. As was his nature, Rich gladly reviewed chapters for me, and treated me not as a competitor, but as a colleague. We often talked about collaborating on a STREAMS version of his TCP/IP Illustrated book. Had events been different, we might have actually done it, but since Rich is no longer with us, revising Advanced Programming in the UNIX Environment is the closest I'll ever get to writing a book with him.

When the editors at Addison-Wesley told me that they wanted to update Rich's book, I thought that there wouldn't be too much to change. Even after 13 years, Rich's work still holds up well. But the UNIX industry is vastly different today from what it was when the book was first published.

Thus, I've tried to update the information presented in this book to reflect these four platforms.

Changes from the First Edition

Rich's work holds up well. I've tried not to change his original vision for this book, but a lot has happened in 13 years. This is especially true with the standards that affect the UNIX programming interface.

Throughout the book, I've updated interfaces that have changed from the ongoing efforts in standards organizations. This is most noticeable in Chapter 2, since its primary topic is standards. The 2001 version of the POSIX.1 standard, which we use in this revision, is much more comprehensive than the 1990 version on which the first edition of this book was based. The 1990 ISO C standard was updated in 1999, and some changes affect the interfaces in the POSIX.1 standard.

A lot more interfaces are now covered by the POSIX.1 specification. The base specifications of the Single UNIX Specification (published by The Open Group, formerly X/Open) have been merged with POSIX.1. POSIX.1 now includes several 1003.1 standards and draft standards that were formerly published separately. Accordingly, I've added chapters to cover some new topics. Threads and multithreaded programming are important concepts because they present a cleaner way for programmers to deal with concurrency and asynchrony.

The socket interface is now part of POSIX.1. It provides a single interface to interprocess communication (IPC), regardless of the location of the process, and is a natural extension of the IPC chapters.

I've omitted most of the real-time interfaces that appear in POSIX.1. These are best treated in a text devoted to real-time programming. One such book appears in the bibliography.

The source code for the examples shown in this book is also available at www.apuebook.com. Most of the examples have been run on four platforms:

Introduction
This book describes the programming interface to the Unix system--the system call interface and many of the functions provided in the standard C library. It is intended for anyone writing programs that run under Unix.

Like most operating systems, Unix provides numerous services to the programs that are running -- open a file, read a file, start a new program, allocate a region of memory, get the current time-of-day, and so on. This has been termed the system call interface. Additionally, the standard C library provides numerous functions that are used by almost every C program (format a variable's value for output, compare two strings, etc.).

Unix Standards
The proliferation of different versions of Unix during the 1980s has been tempered by the various international standards that were started during the late 1980s. These include the ANSI standard for the C programming language, the IEEE POSIX family (still being developed), and the X/Open portability guide. This book also describes these standards. But instead of just describing the standards by themselves, we describe them in relation to popular implementations of the standards -- System V Release 4 and the forthcoming 4.4BSD. This provides a real-world description, which is often lacking from the standard itself and from books that describe only the standard.

Organization of the Book
This book is divided into six parts:

An overview and introduction to basic Unix programming concepts and terminology (Chapter 1), with a discussion of the various Unix standardization efforts and different Unix implementations (Chapter 2).

Examples in the Text
This book contains many examples--approximately 10,000 lines of source code. All the examples are in the C programming language. Furthermore, these examples are in ANSI C. You should have a copy of the Unix Programmer's Manual for your system handy while reading this book, since reference is made to it for some of the more esoteric and implementation-dependent features.

Systems Used to Test the Examples
Unfortunately all operating systems are moving targets. Unix is no exception. The following diagram shows the recent evolution of the various versions of System V and 4.xBSD.

4.xBSD are the various systems from the Computer Systems Research Group at the University of California at Berkeley. This group also distributes the BSD Net 1 and BSD Net 2 releases -- publicly available source code from the 4.xBSD systems. SVRx refers to System V Release x from AT&T. XPG3 is the X/Open Portability Guide, Issue 3, and ANSI C is the ANSI standard for the C programming language. POSIX.1 is the IEEE and ISO standard for the interface to a Unix-like system. We'll have more to say about these different standards and the various versions of Unix in Sections 2.2 and 2.3.

In this text we use the term 4.3+BSDto refer to the Unix system from Berkeley that is somewhere between the BSD Net 2 release and 4.4BSD. At the time of this writing, 4.4BSD was not released, so the system could not be called 4.4BSD. Nevertheless a simple name was needed to refer to this system and 4.3+BSD is used throughout the text.

Most of the examples in this text have been run on four different versions of Unix:

Numerous timing tests are provided in the text and the systems used for the test are identified.