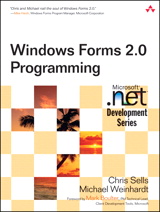 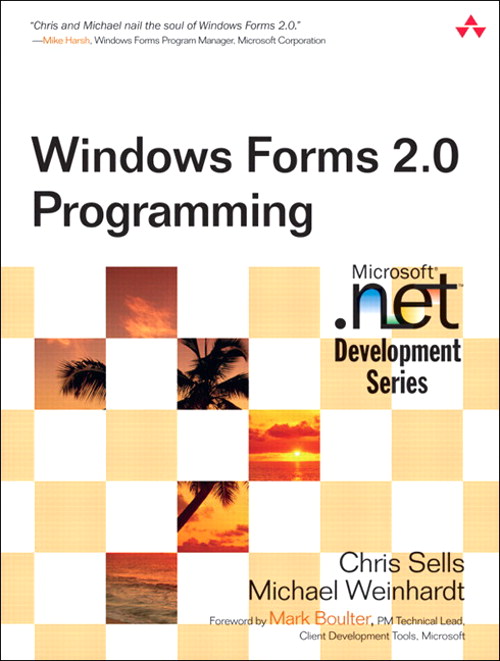 “Some books are different-the content can't be Googled from the Internet, the authors have real-life experiences to share, the code can be used in real-world projects. This is one of those books.”

“Chris and Michael nail the soul of Windows Forms 2.0. This book provides an insightful view into the design of Windows Forms and the integration of new 2.0 features. It is just as applicable for the first-time Windows Forms programmer as the seasoned line of business developer. The ‘What’s New in 2.0’ appendix is worth the price of admission alone.”

“This book takes an amazingly broad and deep technology, and breaks it into manageable pieces that are easily consumed. You cannot survive building a complex WinForms application without this book.”

“Windows Forms 2.0 Programming offers something for every .NET developer. Experienced developers will appreciate the in-depth coverage of new 2.0 features, including the most comprehensive coverage of ClickOnce deployment, multithreading, and the new designer integration found anywhere. Developers new to Winforms programming will appreciate the coverage of the fundamentals all Winforms developers need to know. Whether you’re an experienced WinForms developer or just beginning, you need this book.”

“I don’t want just a description of the WinForms widgets. I can get that online or from other books. What I want is a roadmap for pitfalls to avoid, and innovative solutions for common problems. That is where this book shines. All of us who found the first edition of this book to be an indispensible part of our reference library will appreciate this updated edition that describes WinForms 2.0.”

“The books Chris Sells writes are always insightful and this newest addition is no different. This book in particular is for those who want to understand not just the flashy surface of Windows Forms 2.0, but also how it fits into the .NET environment. Readers will have this book at their desks, not stuck on their shelves, for quite a long time.”

“Chris and Mike have done an excellent job presenting the information you need to be successful with Windows Forms.”

“This book is the ‘must have’ teaching and reference book for WinForms 2.0.”

Readers will gain a deep understanding from Sells and Weinhardt’s practical, well-balanced approach to the subject and clear code samples.

•  Best practices for developers transitioning from Windows Forms 1.0 and MFC

About the Authors  xxv

Windows 1.0 programmers had a straightforward life. They had almost no choices about how to do things; either there was an application programming interface (API), or there wasn’t, and most of the time there wasn’t. This meant that developers had to build almost everything by hand. At the time, this wasn’t a problem. All Windows programmers had the same limitations, so everyone’s apps more or less operated with the same limited set of functionality.

A modern Windows developer, on the other hand, is inundated with choices. The invention of the web alone gives us static Hypertext Markup Language (HTML), server-based user interface (UI) interaction via ASP.NET, and client-side UI interaction via ActiveX controls or AJAX (to name a few).1 On the client side, we have native frameworks like Microsoft Foundation Classes (MFC), Active Template Library (ATL), and the next-generation managed framework known as the Windows Presentation Foundation (WPF is part of WinFX, the follow-on to the .NET Framework). How does a developer choose? Where does Windows Forms 2.0, the topic of this book, fit into this pantheon?