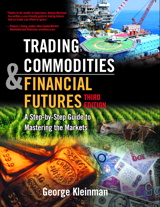 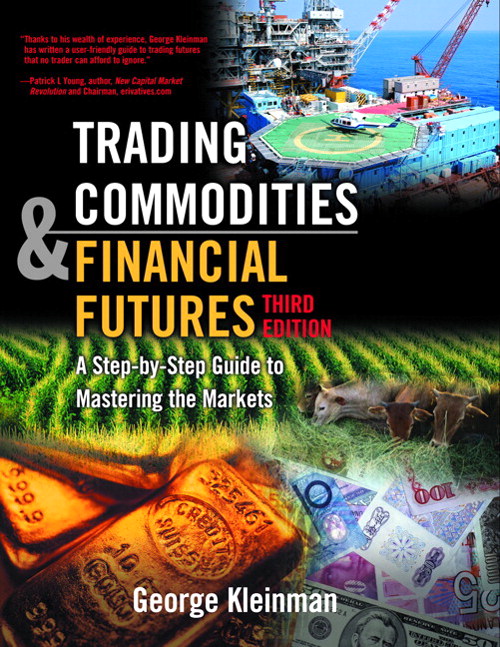 Trading Commodities and Financial Future: A Step by Step Guide to Mastering the Markets, 3rd Edition

More fortunes are made and lost more quickly in the commodity futures markets than anywhere else. It is a game of consequence where profits won by one player are lost by another. The stakes are high, but for those who know how to play well, the rewards can be immense. Trading Commodities and Financial Futures shows you how to play the game to win.

In this book, one of the world's most experienced traders introduces a new step-by-step methodology built on more than twenty-five years of success. George Kleinman begins with the basics—including a complete primer on how futures and options trading works, how traders' psychology impacts the markets, and how to avoid the pitfalls that trip up so many traders.

Winning in a zero-sum game
For every commodities winner, there's a loser: here's how to be the winner

The fundamentals: supply and demand in every key market
Mastering the markets, from crude oil to soybeans, gold to coffee, foreign exchange to stock index futures

TMVTT: The most valuable technical tool
A unique trading methodology—how it works and how to use it

When to get in, when to get out
How to recognize the beginning—and end—of major market moves

Futures markets and the futures contract.

It is as easy to sell short as to buy long.

The Exchange, 'open outcry' and the clearinghouse.

The regulators and regulations.

How to place an order.

The "Voice from the Tomb."

What is an option?

Writing options as a hedging strategy.

1. Stay away from deep in-the-money options.

2. Stay away from deep out-of-the-money options.

4. There is a time for all seasons.

5. Covered call writing is a good strategy for what appears to be a bullish environment, and covered put writing is generally good for what looks like the bear.

7. Look for opportunities to backspread.

8. Use options to hedge a profitable futures position.

In recent years, I've seen more market moves of significance take place in commodities than anywhere else—moves that can literally make the financial difference of a lifetime (for better or for worse). Because of the leverage inherent in commodity futures, more fortunes are made and lost more quickly than in any other markets. Yet, with all the potential that the commodity futures markets have, few really make out well. Do you wonder why that is?

I've been trading for more than 25 years now. As head of a trading firm working with individuals and corporations alike, I've witnessed thousands of trades and participated in thousands more. I've seen fortunes won and lost. After awhile, you do learn a few things, and it's my goal to share some of what I've learned with you. Hopefully, I can save you some of the grief I've experienced and give you a jump-start on the road to success. Of course, I'm still learning and still have a lot left to learn. This, the third edition of Trading Commodities and Financial Futures, is probably my last book (I'm a trader, not a writer) and no doubt my best work. I call it my best work (with all due modesty) because I've grown older, and as you grow older, you learn more. Some call trading a young man's game; however, I can honestly say that after 25 years in the business, I now trade with less stress and better results than I did when I was younger and more impulsive. This is because the older one gets, the less important ego becomes—and I've seen the disasters that can result when ego takes precedence over the major prevailing trend of the marketplace.

Without trying to be all things to all people, I've written this book for both novice and seasoned traders. It is meant to be a primer and reference source for those of you who are seriously considering, but have not yet taken, the plunge into the shark-infested commodity waters. This book is also designed to help those of you who are currently trading and want to perform better. What will it take to succeed? You'll need patience, guts, discipline, and vision. I cannot infuse these qualities into you; instead, I can tell you only what to look for and what to watch out for. We'll start slow and then build up to a master trading plan. Along the way, I'll share some good stories with you.

I entered this crazy business during the commodities boom of the late 1970s. The Hunt brothers were attempting to corner the silver market, the Carter Administration couldn't get a grip on inflation, the currency markets were in turmoil, the Russians were invading Afghanistan, the world was running out of food due to a series of weather disasters, the Iranians were holding American citizens hostage, and there was an energy crisis. Hard assets were in vogue. Paper assets were just that. During the 1970s, the CRB Index (basket of commodities) appreciated well over 100%. The Dow Jones Index (basket of "blue chip" U.S. stocks) literally went nowhere for more than 10 years.

Here's an interesting (and frightening) statistic: The world is adding to its population at the rate of the country of Mexico every year—that's more than 80 million people. If we could shrink the earth's population to a village of precisely 100 people, with all the existing human ratios remaining the same, it would look approximately like this:

The rapid movement of China and India into the mainstream of the world economy is generating new demands for commodities, the likes of which have never been experienced. As just one example, take a look at oil. Today, the United States consumes approximately one quarter of all the oil produced; this is approximately 25 barrels per capita per year. When Japan accelerated its economic growth (from 1950 to 1970), Japanese oil consumption rose from 1 barrel per capita per year to more than 17 barrels. China and India are now in the early stages of a similar growth curve, today consuming just over 1 barrel per capita per year. China and India's combined populations are 18 times that of Japan. As their consumer economies continue to expand, it's hard to fathom the stress that will be placed on the world's limited and diminishing capacity to produce crude oil (or metals, or food for that matter).

China, in particular, is in the back of investor's minds these days because it is driving the most powerful investment trend witnessed since the tech bubble burst in 2000. Look at food consumption trends. China has a huge population with a rapidly growing economy and a growing middle class. As its population becomes richer, subsistence-level eating just isn't good enough. China can't grow enough food to feed its people (which is behind the huge exports of soybeans and wheat to China). All nations face a crop failure every decade or so. What happens when one of the world's major food producers such as the United States, Brazil, or China has the next one? In 1995, due to a poor domestic crop, China turned from the largest corn exporter in Asia into a corn importer. It was no coincidence that this was the year of the greatest bull corn market in history, with corn prices surging from less than $2 per bushel to more than $5.

Chinese agriculture brings about other demands. For example, a large part of increasing the efficiency of Chinese agriculture is fertilizer. Good fertilization could dramatically increase China's ability to produce the basic foodstuffs it needs, and most fertilizers contain a mineral known as potash—a mineral China simply doesn't have enough of. In fact, industry estimates put China's requirements at about 10 million tons five years from now, of which it is able to produce only about a million tons domestically. When I wrote the first edition of this book, nobody had ever heard of the Dalian Commodity Exchange in China. Today, it is the ninth largest exchange in the world—and growing. The Chinese factor is not going away. Instead, it is accelerating the demand for commodities—everything from gold to copper to soybeans to wheat—and as a result, this decade and beyond will be the era of a new and sustained mega-bull market for commodities.

For now, think of this as a game

Financial markets come in many flavors. Think of commodity futures and options trading as a game—the highest stakes money game in the world, where fortunes are made and lost daily. Sure, there's a loftier purpose. Governments allow the traditional financial markets to operate for the purpose of capital formation. Futures markets are allowed to operate as a vehicle of risk transference for commodity producers and users. However, this book is not a scholarly treatise, and it is not about investing for your retirement. It is a guide to winning the game.

A game with consequences

If you choose to play the game, be forewarned that it can dramatically affect your lifestyle. For every buyer of a gold, copper, bond, cattle, or Euro contract, there is someone unseen (but out there) on the other side of the transaction. The buyer is known as the long and the seller as the short. At any point in time, except for the split second when a new trade is initiated, someone is winning, and someone is losing. You should understand from the outset that commodity futures are a zero sum game. For every dollar won by one player, someone else loses that same dollar. Accurate statistics are not available, but it generally is agreed that the great majority of players lose this game. Because this game is zero sum, by definition, the great minority are winning what this majority is losing. This is one of the reasons the stakes are so high. Fortunes are made in commodity futures, in some cases starting with an extremely small stake. Luck might play a part in the short run, but in the end, only those players who play the game better will triumph. No method is foolproof, so the best I can do is help you to place the odds in your favor. If I am able to accomplish this, and you are able to act in a disciplined manner, success is assured. Sound simple? If it were so simple, most people wouldn't lose, and the nature of the markets is to punish the majority. The purpose of this book is to place you in the minority, because it is the minority who will reap the rewards!

George Lindsay and the Art of Technical Analysis: Trading Systems of a Market Master (Paperback)