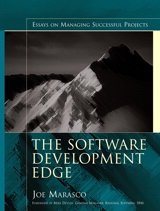 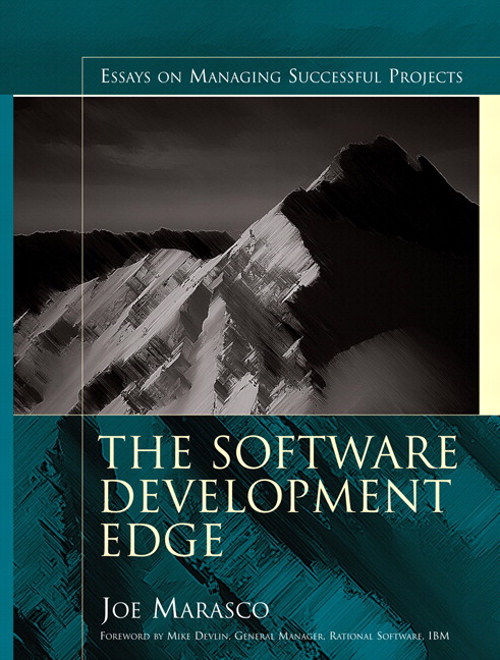 ° Helps readers ship products they're proud of, on time and under budget, with real customer value

° Based on the authors' tremendously popular Franklin's Kite columns in IBM/Rational's popular e-zine: Teh Rational Edge

Over the course of a legendary career, Joe Marasco earned a reputation as the
"go to" software project manager: the one to call when you were facing a
brutally tough, "make or break" project. Marasco reflected on his experiences
in a remarkable series of "Franklin's Kite" essays for The Rational Edge,
Rational and IBM's online software development magazine. Now, Marasco
collects and updates those poignant essays, bringing his unique insights (and
humor) to everything from modeling to scheduling, team dynamics to
compensation. The result: a new classic that deserves a place alongside Fred
Brooks' The Mythical Man-Month in the library of every developer and
software manager

The Software Development Edge: Getting It Out the Door

1. Beginning at the Beginning.

The Importance of Good Software.

Hard Rocks in the Swamp.

How This Program Worked.

Why Was This Generation of Engineers Special?

Getting to Know the Numbers by Their First Names.

So How About Those Computers?

5. The Most Important Thing.

Going Over the Waterfall.

The Application to Software Development.

Have You Heard This One Before?

How to Explain the UML.

What Is the UML, and Why Is It Important?

And Now for the Relevance to Software…

Raising the Level of Abstraction.

How Managers Can Learn a New Programming Language.

What Should the Standard Problem Contain?

Does the Animal Game Fit the Criteria?

8. Getting It Out the Door.

If You Build It, They Will Come.

In the Beginning, There Was the Sandbox.

Why Should the Product Build Be Hard, Anyway?

The Pyramid’s Volume Is Constant.

What Does It Take to Get to a Coin Flip?

It’s All About Risk.

What If We Used Common Sense?

Roscoe Gets into Software.

Guess We Did Something Right.

Roscoe Sums It Up .

Guess We Did Something Right, Part Two.

Roscoe Poses the Problem: How Late Are You Gonna Be?

A Physicist Looks at Project Progress.

Politics Is Inevitable, But…

When Things Get Political.

Other Variants of Bad Politics.

Are We Done Yet?

Roscoe Gets His Nose Bloodied…

…And Immediately Cuts to the Chase.

How They Do It in Texas.

The Relevance to Software.

The Dog Ate My Homework.

The Three Most Common Excuses.

The End of Software Development as We Know It?

Going for the Flow.

Applying the Flow Model to Compensation.

Don’t Let the King Be Your Architect.

Things Aren’t Always as They Seem.

Knowing What You Don’t Know.

In a Hurry, As Usual.

Focusing on the Wrong Features.

When the Design Is Bad…

The Relevance of Testing.

Houston, We Have a Problem.

Some Nice Things Come for Free.

Why This Will Work.

What About Software Piracy?

Until the Sun Takes Over.

Of Course, We’ve Already Left the World of Baseball.

The Five Days of the Fish.

Moral of the Story.

Consequences of the Model.

What Is a Culture?

And the Applicability to Software Is…

When You’re Looking for a Job…

24. Putting It All Together.

Some Final Thoughts on the Model.

Untitled Document This book draws heavily on a series of columns called Franklin's Kite that appeared in Rational Software's e-zine, The Rational Edge, in the early 2000's. These articles were aimed at software development managers, and their goal was to help readers avoid many of the common pitfalls that await software development projects and teams. More than 20 appeared, and we—my editor, Mike Perrow, and I—noticed that readers often began their monthly perusal of The Edge with The Kite.

My intention here is to not only to collect these articles but to sew them together in a form that makes them even more useful for software development managers and their managers. I have done that by reorganizing them thematically, instead of presenting them in the order they originally appeared. This has caused me to do some light editing in places where "forward-referencing" would otherwise take place. I have also paid attention to the footnotes, many of which appeared in the original as URLs and appear here as more formal citations where appropriate. Finally, I have added material at the beginning and end of each chapter so that the context of each article as part of the whole becomes clearer.

The reader will quickly note that the chapters have several different styles. Some of them are expository, some are fairly analytical, and some are folksy "Socratic dialogs" between the author and his avatar, one Roscoe Leroy. Roscoe is an invented character, a good technical general manager who initially knows little about software development. I use him as a foil, allowing his "naïveté" to force me to explain things without using technical jargon. My approach is ecumenical and subversive: I will use any technique that permits me to get the message across. Some of these chapters will appeal to some readers, and others will appeal to others. Whatever works is, by definition, good. I take my cue from Horace, who wrote in The Art of Poetry, "He has won every vote who has blended profit and pleasure, at once delighting and instructing the reader."1

I divide the work into six parts of four chapters each. Briefly:

General Management: These chapters deal with topics that are useful to managers in general and also expose the reader to my background and biases. I include them so that we have a common baseline for what follows.

Software Differences: In this section, we take a look at those things that distinguish software development from other management challenges.

The Project-Management View: I take the perspective that a software-development project is a variant of the generic project and, as such, amenable to classical project-management techniques. On the other hand, I strive to point out what is different about software development.

The Human Element: I turn around in this section and look at software development from the perspective of the people who do it. Once again, I try to compare and contrast that which is similar to that which is different for software-development projects.

Thinking Laterally: Software people come at problems from many different points of view. In this section, I expose the reader to some of the more speculative and original ideas that he or she may not have seen before.

Advanced Topics: The successful software-development manager is like a really good pinball player: His reward for high scoring is given in free games. This additional "stick time" leads to his becoming even more proficient. In this section, I talk about some of the challenges that come with success.

This book has 24 chapters.2 You can read it serially, or pick out a chapter at a time; they can stand on their own. This is a good "airplane book"; read a chapter and then think about it for the rest of the flight. If you get just one new idea from one of the chapters that covers the price of the book, I will have been successful.

With these prefatory remarks out of the way, let's get down to it.

Untitled Document Download the Foreword related to this title.