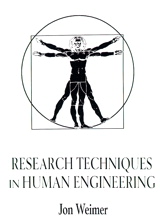 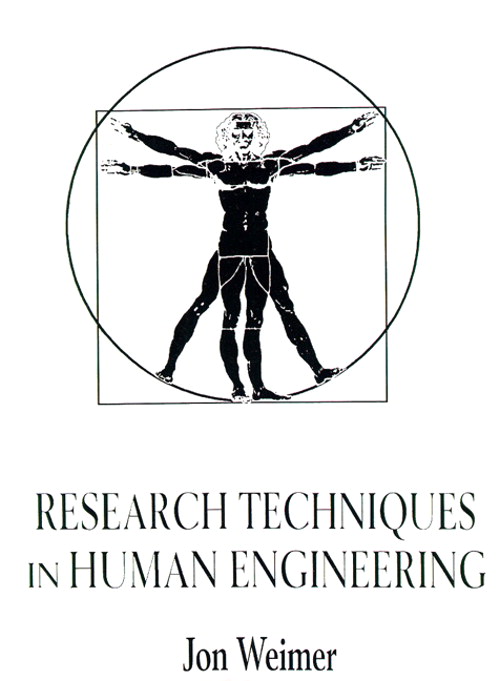 A primer on the research issues and techniques for each human factors subdiscipline, this book brings together the works of some of the best human factors researchers, from Wickens to Willeges and from Boehm-Davis to Mital. KEY TOPICS: Each of the fourteen chapters, covering a range of topics from consumer products, to medical devices, to military systems, is written by a noted expert in the area, and is a brief tutorial on the research issues, techniques, and apparatus used when conducting research in a particular discipline. MARKET: For researchers in the field of human engineering.

1. The Evolution of Human Engineering: A Selected Review.

In the 1960s an d 1970s, the former term was usually associated with psychology (mental workload and cognitive issues) while the latter term was usually associated with physical work. Human Engineering and its analog Applied Ergonomics are concerned with the application of data derived from their respective traditions to the design, test and evaluation of equipment or systems. During the 1980s and 1990s, the boundaries between the terms Ergonomics and Human Factors have blurred as the use of the term ergonomics (which originated in Europe) increased in the United States. Christensen (1987) and Kroemer, Kroemer and Kroemer-Elbert (1994) consider the terms synonymous. International Ergonomics Association: Origin of; Kroemer, Kroemer and Kroemer-Elbert (1994) attribute the origin of the term ergonomics (ergos =work and nomos=laws) to K.F.H. Murrell; in 1949. They also note that, Monod and Valentin (1979) reported the use of an analogous term 100 years earlier in Poland. In June 1949,

Murrell hosted a meeting in the British Admiralty. This meeting led to the formation of the Ergonomics Research Society. Ten years later the International Ergonomics Association was formed and in 1961 it held its first formal meeting. The origin of the Human Factors Society (HFS) follows a similar pattern. In 1955 a planning meeting was held in Southern California, and two years later the first national meeting was held in Tulsa, Oklahoma. In January 1993, recognizing the increased use of the term ergonomics and reflecting the varied interests of its members, the HFS added the term ergonomics to its title and became the Human Factors and Ergonomics Society (HFES).

Human Factors Society: Origin of; Ergonomics: Origin of; The material that follows represents a limited examination of a very broad area which incorporates a wide variety of disciplines. Human Factors/Ergonomics can be viewed from many perspectives. However, there is an interesting parallel in the evolution of Human Factors and Ergonomics: both have had considerable military support and experienced a major growth spurt during and immediately after World War II; (WWII). Accordingly, the bulk of the following section reflects the interaction between the military (United States Department of Defense;, DOD) and Human Engineering. 2.0 1900-1920 Human Factors: Synergism With DOD; Hutchingson (1981) describes the first prehistoric man to use a tool for his protection or service as the founder of human factors thinking. Indeed, a study of people-powered farming tools (e.g., ax, sickle, scythe) reveals changes over time that in formally reflect the system development cycle from requirements definition through limited production, test and evaluation and system retirement. However, the first organized effort in the profession is usually attributed to F.W. Taylor;, who in 1898 restructured an ingot loading task at Bethlehem Steel (Adams, 1989). Before the restructuring, the average daily load moved per worker was 12.5 tons. However, Taylor demonstrated that by use of appropriate selection;, training;, and work-rest schedules;, an individual could move 47.5 tons per day and do so repeatedly.

Subsequently, he designed a series of shovels for handling different types of materials. Taylor delineated basic principles of work design and formalized time and motion studies, which became the basis for today's task analysis. Frank Gilbreth;, one of Taylor's students, is perhaps best known for his improvements to the bricklayer's task. Additionally, Sanders and McCormick (1993) report that during the earl y 1900s Frank and Lilian Gilbreth; also studied skilled performance, workstation design and designs for the handicapped. Except for the type of work cited above, Hugo Munsterberg;'s investigations of industrial accidents and the efforts of Western Electric at the Hawthorne Plant 3, little progress was made in HE during this period except for interactions with the DOD. Hawthorne Effect; The interaction between HFE and DOD has historically been synergistic. Indeed, as reported by Christensen (1987, p.5), "to their credit, it was the authorities in the Department of Defense who first actively supported the human factors profession.

Even today many industries are not yet at the stage of development with respect to human factors that DOD was a generation ago." Driskill and Olmstead (1989, p.43) trace psychology's initial involvement in the DOD to Robert Yerkes;, who described the World War I (WWI) efforts in selection;, training;, motivation;, and aviation; as the first attempt to deal "scientifically and effectively with the principle human factors in military organization and activity. This effort involved some of the early leaders in psychometrics, including Thorndike and Thurstone. During WWI, psychology's major contribution was in the area of selection; and classification of recruits; During this period, the Army Alpha; and the Army Beta Tests; were developed to evaluate the abilities of English-language literates and English-language illiterates (Taylor and Alluisi, 1993). Aviation Psychology was responsible for the development of what may have been psychology's first applied test battery, which was used to predict flying aptitude (Taylor and Alluisi, 1993). Finally, as ever higher altitudes were sought, the deleterious effects of hypoxia and hypothermia on aviators' performance were examined. Selection: Army Alpha; Selection: Army Beta; It is interesting that during WWI, Yerkes headed the Committee on Psychology of the National Research Council (NRC), an antecedent of today's Human Factors Committee of the NRC.

This committee, in response to DOD concerns, has produced many excellent reviews in the area of HFE including: Research Issues in Simulator Sickness (McCauley, 1984), Human Performance Models of Computer-Aided Engineering (Elkind, Card, Hochberg, and Huey, 1989); Human Factors Specialists' Education and Utilization: Resu lts of a Survey (Van Cott and Huey, 1992); and Workload Transition: Implications for Individual and Team Performance (Huey and Wickens, 1993). World War I; DOD; NRC; Simulation; Workload; 3.0 1920-1940 .i.Driving Behavior: Early Experiments; Increased use of the automobile; after WWI, created an impetus for human factors studies of driving behavior;.

Forbes (1981) provides an interesting review (including the following citations) of early research beginning with work at Ohio State in 1927. A 1930 text by Weiss and Lauer describes epidemiological studies of automobile accidents, laboratory studies of estimated velocity, a moving belt "miniature highway" driving simulator and social characteristics of traffic regulation violator s. Perceptual issues examined included head movement, foveal and peripheral vision reaction time; and vision requirements. In 1938, Cobb concluded that correlational analysis of auto accidents, psychophysical testing and interview data could not b e used to identify "accident-prone individuals". In 1939, Forbes concluded that the characteristics of normal drivers needed to be examined to determine what caused them to have accidents. Studies at Iowa State University (Lauer and Helwig, 1932) produced recommendations regarding the colors of signs. Mills (1933) examined sign visibility at night.

Within the DOD, a hiatus in HFE activity occurred between WWI and WWII, except in the area of aviation systems. Dempsey (1985) provides a fascinating overview of the work of aviation pioneers during an era in which both man and machine redefined the limits of aviation. In the U.S. Army Air Force (AAF, in 1947 it became the USAF), the emphasis was primarily medical/physiological, and fell under the leadership of Captain (later General) Harry Armstrong, namesake of the USAF Armstrong Laboratory ;. Researchers, using both animals and man, examined the effects of altitude on performance. In 1935, Captains Armstrong and Stevens set a world altitude record of 72,000 feet during a flight in a National Geographic Balloon. During this period, the effects of accelerative forces were also examined. Angular accelerations were produced by a 20-foot-diameter centrifuge, while a swing was used to produce linear accelerations. As early as 1937, a primitive "G-suit;" had been developed and a recommendation was made to designers that in an aircraft exceeding nine Gs the pilot should be placed in the prone position.