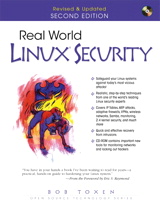 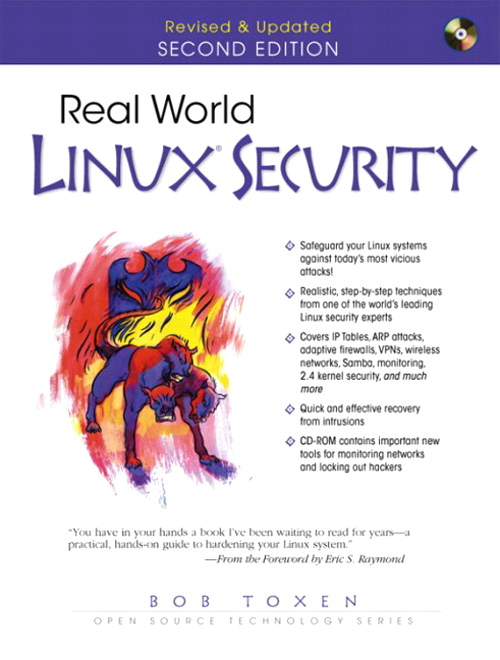 It's not a question of "if" but "when." Will you be ready to protect your system when a cracker comes? Real World Linux Security goes beyond the books that merely detail system vulnerabilities by offering system administrators practical solutions for safeguarding Linux systems and actively responding to break-in attempts. Veteran Bob Toxen shows you how to know your enemies and stop them at the front gate, before they can damage your system. The book is organized into four sections: securing your system, preparing for an intrusion, detecting an intrusion, and recovering from an intrusion. Toxen even provides at-a-glance icons and tables rating the severity and likelihood of each type of attack. Along the way, you'll learn how to configure systems so they alter themselves to lock out a cracker -- and notify the sysadmin immediately -- at the first sign of attack. You'll discover virtually cracker-proof techniques for protecting credit card databases, even if your web server and network are compromised. Toxen also presents techniques for ensuring that, if a break-in does occur, damage will be minimal and a full recovery can happen fast. This fully updated Second Edition now covers IP tables, home, mobile, and wireless issues, and protecting your network from users as well as crackers.

Quick and Easy Linux Hacking and How to Avoid It

I. SECURING YOUR SYSTEM.

3. Quick and Easy Hacking and How to Avoid It.


Confessions of a Berkeley System Mole. Knights of the Realm (Forensics). Ken Thompson Cracks the Navy. The Virtual Machine Trojan. AOL's DNS Change Fiasco. I'm Innocent, I Tell Ya! Cracking with a Laptop and a Pay Phone. Take a Few Cents off the Top. Nonprofit Organization Runs Out of Luck. Persistence with Recalcitrant SysAdmins Pays Off. Net Shipped with Nimda.

II. PREPARING FOR AN INTRUSION.


TCP Wrappers. Adaptive Firewalls: Raising the Drawbridge with the Cracker Trap. Ending Cracker Servers with a Kernel Mod. Fire Drills. Break into Your Own System with Tiger Teams.

15. Scanning Your Own System.

17. Scanning Your System for Anomalies.

IV. RECOVERING FROM AN INTRUSION.

18. Regaining Control of Your System.

19. Finding and Repairing the Damage.

21. Having the Cracker Crack Rocks.

Appendix A. Internet Resources for the Latest Intrusions and Defenses.

Appendix B. Books, CD-ROMs, and Videos.

Linux is a solid operating system. It is easy to use and install, has very powerful capabilities, runs fast on almost any hardware, and rarely crashes. It has few bugs and its widespread support from a cast of thousands ensures that any remaining bugs get fixed as soon as they are discovered. It is highly versatile and can be made as secure as any UNIX system.

Unfortunately, UNIX and Linux machines are broken into every day, not because they are inherently insecure, but because the steps required to expose a system to the real world safely—the modern Internet—are not always so obvious. The single goal of this book is to teach any Linux or UNIX system administrator how to secure his systems, keep them secure, and feel confident that all necessary steps have been taken.

Introduction to the Second Edition

Much has happened in the two years since the first edition of Real World Linux Security was published and much that was anticipated has not come to pass. Rather than the anticipated upward-compatible version of IP Chains with additional features and security, we have IP Tables. Transitioning to IP Tables requires a major rewrite of any firewall script, and some features present in IP Chains under the Linux 2.2 kernel are absent from both IP Tables and IP Chains in the 2.4 kernel. IP Tables is addressed in this book in great detail, and I include some fascinating original research and firewall tips and techniques (see ""Firewalls with IP Tables and DMZ" on page 446). You will not find this information elsewhere.

The Internet has become a much more dangerous place. Two years ago an unhardened system stood a reasonable chance of not being compromised for months or even years. Now, an unsecured system probably will be broken into within a week or two, and a complete compromise within one day of being placed on the Web is common. With the popularity of always-on DSL and cable connections, the exposure to possible compromise is increased by a factor of 10, too. It is guaranteed that each system on the Internet gets scanned for various vulnerabilities on a daily basis now.

The cyber warfare of science fiction is now a fact! There is credible evidence that the Al Qaeda is preparing to commit damaging attacks against U.S. businesses and government. A number of countries' governments or individuals have staged massive cyber attacks against their enemies. With almost every Internet-connected computer handling credit card data, and crackers (sometimes called hackers) getting more vicious and more interested in financially profiting from their attacks, there is far more at risk.

In 2000 and later, there was much talk about the U.S. Federal Bureau of Investigation (FBI) getting more involved in solving computer crime, and there was much talk worldwide about more laws to reduce computer crime. In 2000, Microsoft promised to make great improvements in Windows security and again promised this in early 2002. I have seen none of this come to pass. While the big Linux vendors have made good on their promises to improve on security, they still have made big goofs in the security of even their latest offerings and even the "rock solid" Apache has not been immune from recent major vulnerabilities.

It is my opinion that even the viruses that have caused billions of dollars in damage due to lost files and wasted time are mild compared to what is possible. Viruses that can attack both Windows and Linux and viruses that can attack Linux and several flavors of UNIX have been demonstrated. As I write this, there are major security vulnerabilities in the current versions of Apache on Linux, UNIX, and Windows (the first in five years), as well as in Internet Explorer and Internet Information Services (IIS) running on most systems. It would not be especially difficult for a hacker to create a virus that attacks all of these platforms, sniffs these systems for credit card, bank account, and investment account numbers, and drains the accounts of money before anyone discovers it.

Real World Linux Security has undergone a major revision in the second edition. Problems that people did not worry about two years ago are now big concerns and have been addressed here. New technologies, such as wireless networks and IP Tables, have been addressed in depth. Hackers now are using more subtle attacks that were rare two years ago. These include attacking at the address resolution protocol (ARP) level. Even the lowly network switch now is being compromised with regularity. All of these situations are addressed.

Better methods for monitoring your network and instantly locking out attackers in this more vicious world are explained in step-by-step detail. Arpwatch, Logcheck, Portsentry, the newest versions of Samba and the GNU Privacy Guard (the GNU answer to Pretty Good Privacy PGP), the 2.4 kernel, Red Hat 7.3 and SuSE 8.0, VPNs, and greatly improved Adaptive Firewall techniques all are covered in depth in this book. About 150 pages of new material have been added, while appendices containing listings of programs on the CD-ROM and obsolete material have been removed or revised.

Who Should Read This Book?

This book will aid Linux and UNIX System Administrators (SysAdmins) in making their systems and networks as secure as possible from intruders and improper action of the users. It covers both quick and simple solutions, and some more involved solutions to eliminate every possible vulnerability.

It is organized to allow the busy SysAdmin to increase the security of the systems one piece at a time. It is recognized that one cannot take a system down for a week and work exclusively on its security for that week. In the real world, a SysAdmin's time is divided up by many tasks that cannot wait and systems are too critical to stay down for long.

In the real world, some systems will be broken into despite the best efforts of talented SysAdmins. This book devotes over 60,000 words to dealing with a possible break-in. It deals with how to prepare for it, how to detect it, and how to recover from it quickly and completely with minimal loss of confidential data and money, with minimal inconvenience to one's customers and employees, and with minimal publicity. This is considered one of the unique features of this book.

On March 30, 2000, 350 "hackers" from around the world gathered in Israel for a conference. Organizers there said that they were able to break into 28 percent of Israeli computers that they tried and that this percentage was typical worldwide. This was with the permission of the computers' owners, who were convinced that their computers were invulnerable. The quoted statistics were not broken down by operating system type. Both John Draper ("Captain Crunch") and Kevin Mitnick were there.

The book is designed to be used by the veteran of many years of Linux and UNIX experience, as well as the new SysAdmin. It does assume that the reader is somewhat knowledgeable in system administration; Prentice Hall has other fine books to help people hone their SysAdmin skills. There are many useful details here, both for the person with a single Linux box at home and for those supporting multinational corporations and large government agencies with very large networks comprised of multiple types of operating systems.