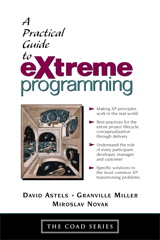 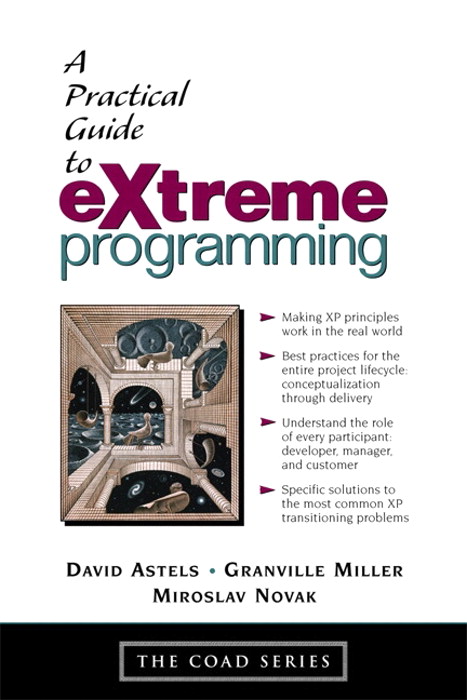 Practical Guide to eXtreme Programming, A

XP is taking off like a rocket, rapidly becoming the world's most popular agile methodology. Now, there's a readable, concise guide that brings together all the guidance and best practices you need to make XP work in your organization. The authors begin by introducing the key practices that developers must take to heart in order to make XP work, and the key players in an XP project -- including developers, managers, and customers. You'll learn how to create a vision of your proposed software system, write effective user stories and acceptance tests, and plan for regular releases and iterations. The book identifies best practices for XP testing, "coding with intention," integration, and refactoring -- showing how developers can overcome the challenges early XP implementers have encountered, and achieve the powerful benefits XP can provide. For all software developers, architects, analysts, and project managers interested in XP and agile methodologies.

The Principles of Extreme Programming

(NOTE: Each section ends with a conclusion.)

3. Creating a Vision of the System.


Conceptualizing the System. The Vision Card. The Metaphor. Metaphors for Development.


What Are We Looking for? Keep It Simple. Conceptual Solution Spikes. Conclusion.


The Problem. What's in a Name. Constant Refactoring and Communicating.


The Mechanics of Pair Programming. Development as a Conversation. Peer Pressure. Double the Fun. The Net Effect. As Fast as the Slowest. Conclusion.


The XP Project. Why Test? What to Test. When to Test. How to Test: A Testing Framework. Warranted Assumptions Revisited: Test Driven Development. Conclusion.


What's in a Name. Simplicity is the Ultimate Complexity. Warranted Assumptions. Let the Compiler Tell You. “No Comment”. Collective Code Ownership. Better to Burn Out than to Fade Away? Happy Developers Are Productive Developers. Get a Life. Conclusion.


Some Practical Advice. Only Check in When Tests Pass at 100 Percent. An Antipattern. Approaches to Integration. What About Code Reviews. The Impact of Collective Code Ownership.


Where XP is Going. On to the Battlefield. A Holonic Approach to XP. Software Development as a Craft. Evolving XP.

The principles of extreme programming have changed the way we think about software development.

The Need to be Extreme

The need to deliver software more quickly caused Kent Beck, Ward Cunningham, and Ron Jeffries to explore the extremes of certain development practices. The first XP project, the Chrysler Comprehensive Compensation system (code name C3), was, on one hand, constrained and, on the other, pushed to its limits. This practice was called "setting the dials to ten." The result was a breakthrough in the software development called XP.

Beck was certainly the driving force behind taking this project, and the multitude of others that have followed, to the extreme, and he continues to evolve XP. His vision continues as he asks us to question the basic principles of software engineering. Naturally, many of these principles are being replaced with new and better ones. New principles, such as working with a real live customer instead of a specification, are quickly gaining acceptance in the software community. The idea of creating tests before the software is written is quickly becoming a vital part of every software development process.

This book attempts to capture one point in the evolution of XP. We have examined the principles and have created what we believe to be effective practices. As a result, we believe that this short guide serves as a practical one from which to learn XP.

We used some of the XP principles to write this book (adapted, of course, for book writing). For example, various things that one of our customers felt we needed to cover were written on index cards and scheduled into the iterations of the book. This book has been continuously integrated and refactored. Hopefully, you, another customer, will like the finished product.

To obtain the code from the appendix as well as other information about this book and XP in general, we invite you to visit Saorsa Development Inc.'s web site at http://www.saorsa.com