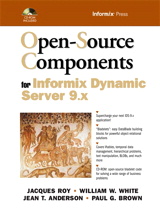 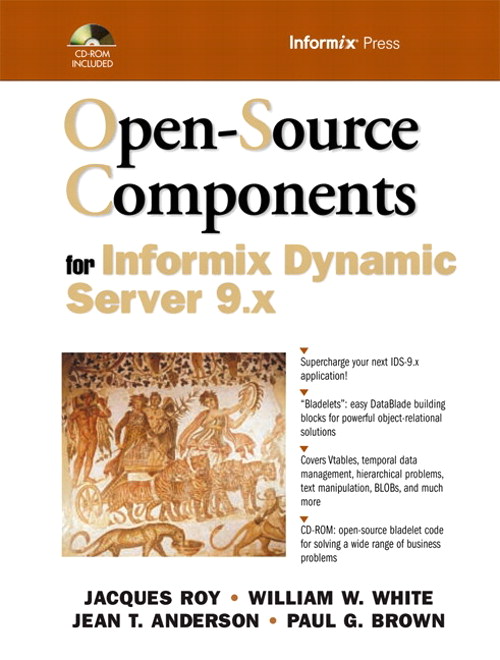 Object-relational databases offer immense power — but many database professionals have failed to use it, because doing so required them to write their own DataBlade extensions. This book presents a breakthrough solution: bladelets. Created by a team of Informix' leading DataBlade experts, bladelets serve as building blocks, bringing Informix Dynamic Server 9.x ORDBMS power to bear on a wide range of business problems, while requiring far less original programming.

All ten bladelets are covered in detail, with open source code provided on CD-ROM. Whether you use them "as is," or as the model for your own DataBlades, they can dramatically improve the performance, value, and time-to-market of your very next database application. Coverage includes:

The accompanying CD-ROM contains all of the book's code examples — plus a toolbox of open-source DataBlades, complete with source code, designed to quickly solve a wide range of business problems.


Software Extensibility. How Do We Call It? IDS 9.x Object-Relational Features. Usage Examples. A New Approach to Problem Solving. What's Next?

3. Time Is on Our Side: Temporal Extensions to SQ.

6. Managing a World of Shapes.

11. Multiple Versions of Your Data.


Using VTable. Limitations and Future Enhancements. Where to Get the VTable Distribution. Acknowledgments.

When we look at the evolution of programming languages, we quickly notice that the programmer's productivity increases with the level of abstraction of the language. The step from binary code to assembler greatly increased productivity because it took care of translating symbolic addresses and variables to their corresponding memory addresses. Third-generation languages added structures and programming constructs, providing yet another jump in productivity. One of the most underrated features is function prototyping, which was added to some languages when object-oriented languages started gaining momentum. This gave the compiler additional information to check for proper argument types, reducing a number of run-time errors that were often difficult to locate.

The rise of object-oriented programming languages provided a more formal way to encapsulate functionality and divide complex problems into subcomponents. In today's object-oriented languages we also find prepackaged object classes, such as the Java Class Libraries, that provide a solution to common problems that occur frequently in most systems. This frees the programmer from these tasks, increasing productivity.

What has happened on the database side? A lot of progress was made on database administration over the last 20 years. On the programming side, we've seen the creation of stored procedure languages that can run procedural code over Structured Query Language (SQL) statements in the database. This improvement was added to relational databases several years ago. Furthermore, this had little impact on the database system as it consists of adding a procedural programming language closer to the database. This procedure language improves performance by reducing the

overhead of data transfer between the database and the application. Because stored procedures are old news by now, it led industry analysts to declare that databases are now a commodity. Of course, they are commodity products as long as you are willing to program to the lowest common denominator. This means that you use as few features as possible and make your life more difficult. This leads to longer development time and slower performance.

Several years ago, a new database model appeared, the object-relational database. Because this model builds on the relational model, it is its superset. This has the benefit of preserving sizable investments made in relational databases over the last few decades. Some of the benefits of this new model were recognized and a new SQL standard was created to describe it. The relational model is opened up to allow programmers the capability to add new functionality that will make the database better suited to a specific business environment.

The new standard talks about adding new data types and functions in the database server. What do we do with these new features? For some reasons, this new functionality has been understood as something to support multimedia. Nothing could be further from the truth. It is about using the proper business and support types and business functions to arrive at a more optimal solution. A few books discussing the implementation of the object-relational technology tried to address this issue. These books include:

These books cover multiple examples of application of the new technology, analysis, design, and implementation of your solutions. So, what's missing?

Until now, it appeared that you had two choices:

There is space for at least one more possibility. Many business applications can use simpler extensions that can be used as components in a larger solution. The Informix team has dubbed these Bladelets. They consist of smaller packages that provide some utility functionality. This is similar to foundation classes in many object-oriented languages. They are building blocks that allow you to build your business systems starting at a higher level of abstraction: You don't need to start by writing the equivalent of your own string class.

This book takes a different approach from its predecessors. Instead of assuming that people want to build their own extensions from scratch, it introduces a set of extensions that can be used as tools to build business solutions. These extensions can be quickly added to a database and used within SQL statements. The development effort is now spent in designing new solutions and writing the appropriate SQL statements. Because people are already familiar with SQL, it requires little effort to review the new "verbs" and data types available. The increase in productivity is almost instantaneous!

This book covers a varied set of Bladelets that cover a wide range of problems. Each chapter introduces one open-source component, or Bladelet. The focus is more on where the component can be used than how to use it. The chapter's corresponding appendix goes into the details of the functionality. With examples on how to use the component, the designer is better equipped to imagine more efficient approaches to solve critical business problems.

This book covers a subset of the Bladelets available. The descriptions provided will hopefully help you figure out better ways to solve your business problems. Other Bladelets can be useful to you. They are available in the Informix Developers' Network Web site, under the DataBlade developer's corner. The Web site address is:

This is also where you can find up-to-date code for the Bladelets described in this book. The two locations to look at are:

You can also send questions and comments to the people maintaining this site using the following email address: idn-datablades @informix.com. You can also make suggestions for new Bladelets.