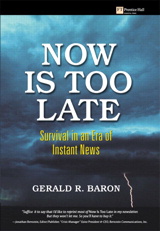 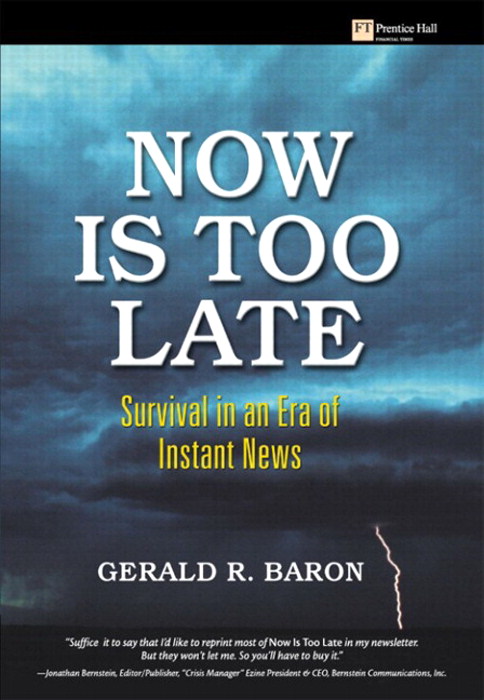 Now Is Too Late: Survival in an Era of Instant News

Now your reputation can be attacked by anyone, anywhere, at any time. Now Is Too Late delivers a blueprint for 21st-century crisis management that reflects your constituents' new demands for instant, accurate answers direct from you, not the media. Crisis management expert Gerald R. Baron shows why you're a target even if you've done nothing wrong, identifies powerful new crisis preparation techniques, and helps you think clearly and act effectively to protect your reputation no matter what happens.

The Role of Technology in Communication and News Management

2. Toward a Postmedia World.


Traditional Media and the Global Experience. Use of the Internet on September 11. The Personalization of Media. A Multitude of Broadcasters and Publishers. Endnotes.


Relevance and Demand. Instant News Case Studies. The Role of the Internet in Changing Expectations. Characteristics of the New Audience. The News at My Hip. Endnotes.

4. How News Is Changing.

5. When Opponents Grab the Microphone.


A Time of Cynicism. Media Infotainment. Activists and Other Opponents. Now They Have the Microphone. When the Politicians Get Involved. Endnotes.

6. How the Rules Have Changed.


Audience: Whom Do We Need to Talk to? Message: What Message Do We Need to Convey? Listening: What Do We Need to Hear From Them? Voice: Who Needs to Deliver the Message? Media: How Should We Communicate? Endnotes.

8. Preparing the Organization and Team.

9. The Role of Technology.

10. Crisis Preparation: What To Do Before It Happens.

11. Crisis Management: What To Do While It Is Happening.

12. Reputation Recovery: What To Do After It Happens.


Getting out of the Bunker. Restoring Credibility. Returning to Normalcy. Endnotes.

13. A Glimpse Into the Future.


Media Splintering. The Ubiquitous Internet. Wireless Connectivity. Replication of Experience. Everyone Is a Writer, Producer, Publisher, and Broadcaster. What It Means for Tomorrow's Communicators. Thinking Like a Broadcaster. Audience Control. The Battlefront of the Future: Being a Credible Source. Information Pointers. Truth Filters. The Sum of All Parts: Tell the Truth. Endnotes.

"A lie is halfway around the world before you can get your pants on."

In a heart's beat of a faster and faster pace, it's suddenly becoming a more dangerous world. Although much attention has been focused on security—personal, national, transportation, and business—in the months following the September 11, 2001 terrorist attacks, this book focuses on another type of security risk, the new risk to reputations.

Corporate and organizational reputations are more at risk than ever, not because of a cataclysmic event such as the al-Qaeda offensive, but because of the significant changes in how the news indust operates and how the public gets its information. To compete in an increasingly crowded media environment, news organizations have turned increasingly to "infotainment." Activists have learned how to exploit old and new media to push their agendas. The news public is becoming increasingly cynical. Digital, satellite, and other technologies are increasing the rush toward "breaking news," meaning that reputations can be severely impacted before a communication team can be assembled. Primarily, the news and public information world is changing because of the Internet. If a lie could travel halfway around the world before the prime minister could get his pants on before, in the early days of the new century that lie can travel around the multiple times world, causing irreparable damage before the great gentleman would have time to put down his cigar before pulling on his pants.

Many public relations professionals, communication managers, and business and organization leaders are becoming aware of these escalating risks. The average tenure of CEOs has been declining and a review of news headlines shows a strong correlation between a public reputation problem and a short career for a CEO. In the weeks following September 11, 2001, executives were asked if they felt their organizations were prepared to handle a large-scale crisis, and the overwhelming majority said no. Crisis communication professionals are reporting that more company leaders are expressing interest in communication plans. Public relations and communication managers are struggling with the variety of issues involved in protecting their organization's brand value and reputations in a world of increasing risk.

This book is essentially about the need for leadership in reputation management. CEOs and executive directors are the ones who fall when the public turns against a company and the organization loses its public franchise. Leadership at this level is critical if an enterprise is to survive a rapid and voracious attack on everything that it is and does. Innovative and aggressive communication managers are taking a higher profile in companies and organizations when they demonstrate they can provide concrete solutions to reputation protection. There is a strong need for leadership from both the executive level and the communication leaders.

To address this new "instant news" environment, communicators and leaders must have an understanding of the conditions that create the risk and a clear picture of what can be done to protect against the threats. That is what is offered here: an analysis of the new public information environment and the strategies needed to protect reputations and enhance brand value while operating in this new environment.

While the war on terror was waged in far corners of the world, Americans were "entertained" with stories about the demise of several giants in the world of business. Two of the country's largest bankruptcies occurred when Enron, and then Global Crossing, needed protection from creditors. Although the greed, dishonesty, and shady internal politics revealed by both news media and a Congressional investigation of Enron should have provided sufficient diversion, attention was soon focused on the respected global accounting firm, Arthur Andersen. First, there was concern about Andersen's role in potentially illegal accounting practices. Then the news broke that an Andersen partner was shredding documents and destroying evidence that investigators were seeking concerning Enron's financial dealings. A reputation crisis of the first order took over the headlines, the attention of the business world, and the global news audience.

Although many reputation crises are played out on the national or international media stage, a far greater number involve smaller companies in local or regional markets. Not all companies have the reach of Firestone, ValuJet, or Exxon. But for these less prominent companies, the impact on their futures is just as great, even though the audience may be smaller. Local newspaper articles, local television broadcasts, and localized activist attacks are every bit as significant. Manufacturing companies, oil and chemical companies, health organizations, government agencies, nonprofit organizations, politicians, and other individuals whose public stature is vital to their future are at risk in the new environment of instant news.

However, it is not all bad news. Along with the new risks come new opportunities. In the Internet-connected global village, everyone has the potential of being a broadcaster or publisher. This is being demonstrated every day. Today, new voices on the Internet are gathering audiences that rival those of some daily newspapers. Some of them are doing it from their spare bedrooms with almost no investment except their own time, ideas, and energy. Activists and corporate opponents are clearly demonstrating the power of the new media tools to forge opinion and create public and political action: It's one of the significant risks. However, these same tools and methods are available to companies and organizations needing to build their enterprise and protect their investment. The question is whether or not they will be as quick to learn, adapt, change policies, invest in needed technologies, and meet the challenge.

With all the new voices, the acceleration of news delivery, and the growing importance of public information in policy making around the world, the noise level is rising. From this cacophony a key question emerges: Who is to be believed? Credibility has always been an essential element for people and organizations operating in the public sphere, but in the instant news world, when everyone is shouting to be heard, credibility takes on a new urgency. Protecting the organization's voice and public franchise becomes the real role of executive and communication leadership. Today, there are so many ways to lose believability that anything remotely resembling a cover-up is certain to destroy a solid reputation. Yet another way to lose credibility in this news era is simply to be too slow. Crisis communication case studies of the last few years, Andersen's prominent among them, offer one example after another of providing too little, too late.

Speed, direct communication, and credibility are the keys to survival in this risky public information environment. Understanding these needs thoroughly and doing what it takes to prepare to meet the challenges these demands pose is the only real protection against the frightening discovery that now is too late.