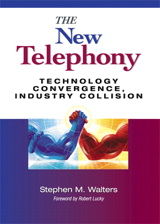 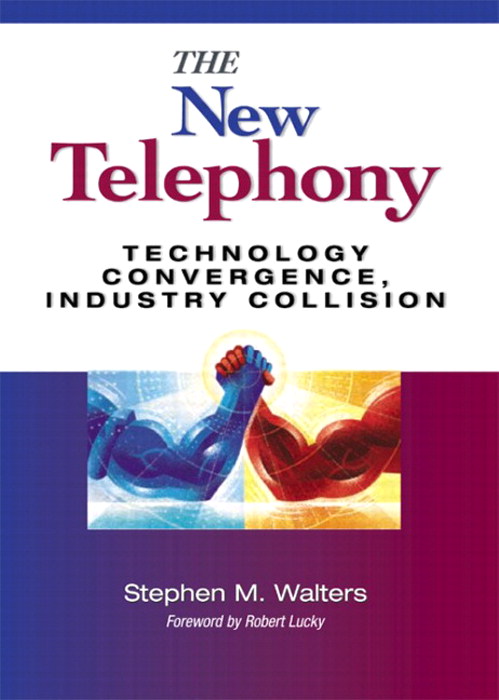 The telecom industry faces non-stop change: new technologies, new business models, new competitive environments, and changing regulation. Now, one of the industry's most respected experts presents a systematic guide to the "New Telephony": where telecom has come from, where it stands now, and where it's headed. Telcordia principal and fellow Stephen M. Walters offers exceptional insight into today's telecommunications "battlefield," comparing the strengths, weaknesses, and business models of traditional and Internet-focused service providers. Walters identifies and thoroughly evaluates the key factors that will drive—or prevent—success in tomorrow's radically new telecom environment:

Whether you're a telecom manager, buyer, consultant, investor, analyst, or technical professional, this book offers a comprehensive framework for making intelligent decisions—for your company, your finances, and your future.

"Steve has put his finger directly on the key issue facing the telecommunications industry—what business model will allow communications providers to harness the opportunities and complexities offered by the explosion of new technologies, provide businesses and consumers with services they will pay for, and most importantly, do all this while growing revenues and profits. This book is rock solid technically... but the business insights are of fundamental importance."

The New Telephony: Convergence of the Telephone and Internet Businesses

7. The Players and Their Games.

The telecommunications industry is being rocked by change fueled by the advent of the tremendous success of the Internet and its technologies. This book considers the future of telephony in that light. For quite some time, there has been competition in the telephony business. Long-distance rates have seen continuous decreases for two decades as new carriers sought to capture greater and greater market share. Local carriers have seen competition for interconnecting the networks of large corporate customers and for providing them access to long-distance services. So, competition and change are not new issues in telecommunications.

But the Internet has forced an entirely new set of changes on the phone business. There are new carriers, new business scenarios, new technologies, and new ways of thinking about end users and the services they seek. The pathos of change has escalated as Internet service providers and application providers seek to provide their new services to the end users, usually through the networks of the existing carriers. For a long time, these services were too small in service volume to attract the attention of the major carriers, and the Internet grew without their involvement.

So now, after more than 20 years of growth, improvement, and experimentation, the Internet has become a major issue for large carriers. On the one hand, it threatens their existing business in several ways. On the other, it represents an opportunity to offer new services to their customers. In between the two, there is a goldmine of new technology that might be applied to their existing networks in novel and innovative ways. The Internet and its technologies can no longer be ignored by the telephone business. Central to resolution of this confrontation are voice services. It seems inevitable that the voice business will disappear into the Internet.

In addition, by its very nature, there is no natural "owner" of the Internet. To many, the Internet is a bewildering morass of networks and companies that exist in a state of chaos. Indeed, this is a reasonable description of the Internet, since there is no central authority, no single entity that is "The Internet." The Internet exists because of the adoption of a few simple sets of rules and protocols that enable the exchange of information. Business arrangements are unregulated, which allows a dynamic market attitude and rapid progress. Because companies involved in the Internet as a networking business can adopt any business model, it is not possible to make broad, sweeping statements about much of anything relating to Internet business issues. Overall, this is a good thing, but it makes for difficulty in understanding the Internet as a business and in having uniform metrics and values for services and charges.

It is possible that this aspect of the Internet will change in the coming years. Like any frontier, the Internet is now operating in many widely varying business models. But just as the Wild West eventually adopted a more tame posture as it matured, so will the Internet. As this occurs, it is interesting to speculate who and what may become the primary forces in the "New Internet." Those companies who are the prime movers of the Internet today may or may not find themselves displaced as time moves forward and more uniform practices prevail. Certainly, there are many powerful companies with extensive resources who would like to become the major forces in the Internet network business. The question is, who will be the "owners" of the Internet? Will it be those who operate it today? Or will other, more powerful companies, supercede the present businesses?

In his epic song, the great bard Bob Dylan explains the changes he foresaw during the 1960s in America. Even though he contemplated a far different set of issues than those that confront the telecommunications industry, his words are, in my view, quite appropriate to set the stage for what is to come. In each stanza, he offers advice for (respectively) public switched telephone network operators, authors, regulators, and the original creators of the Internet. As an author, I intend to follow his advice, because I am certain that "the wheel's still in spin" and it will be for some years to come. The fundamental question that is addressed by this book echoes in the final stanza.

The times they are a-changin'

Come gather 'round people
Wherever you roam
And admit that the waters
Around you have grown
And accept it that soon
You'll be drenched to the bone.
If your time to you
Is worth savin'
Then you better start swimmin'
Or you'll sink like a stone
For the times they are a-changin'.

Come writers and critics
Who prophesize with your pen
And keep your eyes wide
The chance won't come again
And don't speak too soon
For the wheel's still in spin
And there's no tellin' who
That's namin'.
For the loser now
Will be later to win
For the times they are a-changin'.

Come senators, congressmen
Please heed the call
Don't stand in the doorway
Don't block up the hall
For he that gets hurt
Will be he who has stalled
There's a battle outside
And it is ragin'.
It'll soon shake your windows
And rattle your walls
For the times they are a-changin'.

Come mothers and fathers
Throughout the land
And don't criticize
What you can't understand
Your sons and your daughters
Are beyond your command
Your old road is
Rapidly agin'.
Please get out of the new one
If you can't lend your hand
For the times they are a-changin'.

The primary purpose of this book is to place those things that are a-changin' in the telecommunications industry into a rational framework. This book explains what the telecom industry is, how the Internet and its technologies relate to voice services, and how telecom may evolve in the coming years. Knowledge of the technology and business issues will give you insight into the changes as they occur in the telecommunications industry. As Bob Dylan advises, I will resist making specific spectacular predictions. Instead, I will frame and explain various issues, pressures, and possible events that could affect the ultimate outcome. As new events and business pressures arise, I encourage you to synthesize and examine for yourself the plausible outcomes. As much as possible, the book is couched in business considerations, including assets, workforce, financing issues, investments, and profitability. Technology is also explained so that you will have a solid understanding of how the networks operate from a perspective of technology, complexity, and management needs

The book provides an overview of the confrontation that is now occurring within the industry. It then reviews human speech and requirements that a network must meet to ensure successful operation. Then, the technology and operation of the existing public switched telephone network are described, after which the Internet and its key technologies are explained. Once the technical approach of carrying voice over Internet technology is explored, the structure of the "new telephony" and its control schemes are defined. Next, drivers for change in the business approach that affect competition and the rate at which change can occur are proposed, and scenarios are constructed based on the possible competitors and partners. For each scenario, the various forces at play that could influence its outcome are discussed. The concluding chapter discusses what the future might bring to the industry and some issues affecting its direction.

I hope you find this book enjoyable and informative.

The Strategy Book: How to think and act strategically to deliver outstanding results, 3rd Edition