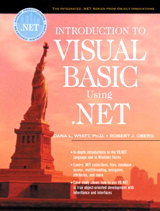 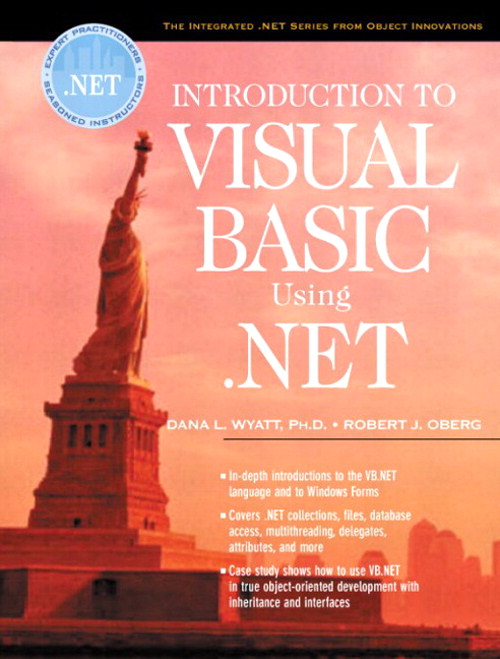 Using real-world examples and a case study, this book helps you master VB.NET from the ground up -- or rapidly migrate to VB.NET from whatever version of Visual Basic you've used before. Dana Wyatt and Robert Oberg present a thorough introduction to the .NET Framework and Visual Studio.NET from the perspective of Visual Basic developers at all levels. They examine the basic coding constructs of the language, and thoroughly explore the design of object-oriented programs with VB.NET. The book also includes substantial coverage of building next-generation Windows applications using Windows Forms. Finally, the authors introduce major .NET classes for collections, files, ADO.NET, and threads, showing VB.NET developers how to make the most of them. A case study helps leverage the skills you've learned throughout the book and guides you to building a complete system using VB.NET. For every Visual Basic developer who wants to master VB.NET -- regardless of experience level.


I. INTRODUCTION TO .NET AND VB.NET.


V. VB.NET AND THE .NET FRAMEWORK.

This book is a practical introduction to programming in VB.NET and using services provided by .NET. It emphasizes the VB.NET language and is part of The Integrated .NET Series from Object Innovations and Prentice Hall PTR.

The book may also be read by more experienced programmers who desire a simple introduction to VB.NET with many example programs. Although designed for working professionals, the book includes enough detail, careful explanations, and sample programs so that it can be useful as a college textbook.

VB.NET is now a fully object-oriented language. It supports classes, interfaces, interface and implementation inheritance, and polymorphism. It is also highly integrated with the .NET Framework. These features make VB.NET a compelling language for developing object-oriented and component-based systems. This book provides thorough coverage of all these features.

VB.NET, as a language, is elegant and powerful. However, to fully utilize its capabilities, you must have a good understanding of how it works with the .NET Framework. The book examines several important interactions between VB.NET and the .NET Framework, and includes an introduction to major .NET classes for collections, files, databases, and threads.

This book is organized into five major parts and is structured to make it easy for you to isolate what you most need to know.

Part 1, which everyone should read, begins with an introduction to the .NET Framework. The second chapter provides a short introduction to hands-on programming using VB.NET, so that you can start writing code on .NET right away. The third chapter introduces Visual Studio.NET. It is the latest version of Microsoft's popular Visual Studio development environment and has many features that make application development easier and more pleasant. These chapters will equip you to use Visual Studio throughout the rest of the book.

Part 2 covers the core features of VB.NET. If you know Visual Basic, you will have a definite leg up in learning VB.NET, and you can quickly skim this section, paying attention to the information in the sidebars. Sidebars alert you to either (1) the first time a concept new to VB.NET is introduced, or (2) a significant change to the VB.NET language that experienced VB programmers should note. If you are not familiar with Visual Basic, this section is for you. It will quickly bring you up to speed on the core topics of data types, operators, and control structures.

Part 3 examines the object-oriented features of VB.NET. This language is now fully object-oriented, which is one of the most significant improvements in VB.NET. In this part, we begin by examine how classes are built. Subsequent chapters discuss implementation and interface inheritance. These topics are covered gradually and thoroughly, making this part of the book accessible to readers without previous object-oriented experience.

Part 4 covers Windows programming in VB.NET. Microsoft has adopted a new approach to developing Windows applications that will be readily apparent to previous VB programmers. Systematic coverage is presented on the core topics in Windows Forms, including form design, controls, events, menus, toolbars, and dialogs. The rich variety of useful controls provided by Windows Forms is covered in detail.

Part 5 explores the relationships between VB.NET and the .NET Framework. .NET collection classes are introduced. We also examine the .NET interfaces that classes must implement for fundamental operations such as copying and comparing objects. Delegates, a .NET callback mechanism, are discussed. We also introduce both VB.NET file I/O and database programming using ADO.NET. We look at multiple thread programming and attributes. Attributes are powerful in .NET, enabling the programmer to accomplish tasks declaratively, even while writing very little code. You can implement custom attributes in VB.NET. You can read information about custom attributes, or any other metadata, by a mechanism known as "reflection." The book concludes with an introduction to components and assemblies.

The only way to really learn a programming language is to read and write many, many programs. This book provides many programs that illustrate features of VB.NET. The programs are clearly labeled in the text, and they can all be found in the software distribution that accompanies this book, available through our associated Web site. Also, a case study illustrates many features of VB.NET working together in combination, as they would in a practical application. We make a special point of demonstrating the object-oriented features of VB.NET. If you are new to OO, reading the case study is a must!

The sample programs are provided in a self-extracting file. When expanded, a directory structure is created, rooted in C:\OI\IntroVb. The sample programs are in directories Chap01, Chap02, and so on. All the samples for a given chapter are in individual folders within the chapter directories. The names of the folders are clearly identified in the text. An icon in the margin alerts you to a code example. The case study is in a directory called CaseStudy, at the same level as the chapter directories.

Web SiteHere's the Web site for the book series: