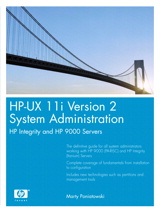 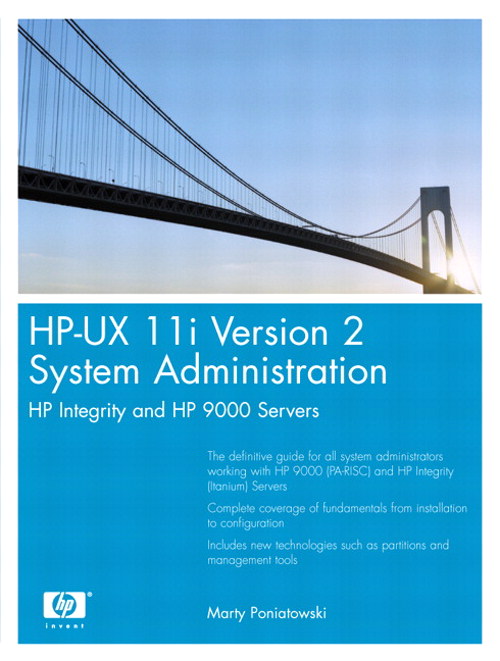 This is the definitive guide to installing and administering HP-UX 11i Version 2 in any environment, on both HP 9000 and HP Integrity server families.

Drawing on 18 years of on-site HP-UX consulting experience, Marty Poniatowski offers unparalleled practical insight into running HP-UX 11i efficiently and reliably, illuminating features even experienced HP-UX sysadmins find confusing. Poniatowski organizes this book around your day-to-day needs and your system's lifecycle. He begins with in-depth coverage of installation and bootup, then walks through everything from LVM and kernel configuration through networking. He especially focuses on the capabilities and tools that make HP-UX unique—and how you can use them to save time and money. Coverage includes

Conventions Used in This Book.

HP-UX 11i System Administration Handbook covers HP-UX for both Intel ® Itanium ® servers, called Integrity Servers, and Precision Architecture (PARISC) servers, called the HP 9000 Servers. There were different versions of HP-UX that ran on HP Integrity and HP 9000 server families in the past but now HP-UX 11i version 2 runs on both server families, that is, the same source code base is used for both server families. Many differences exist between version 1 and version 2 such as commands used to configure the kernel. The following is a partial list of features of version 2, some of which are comparisons to version 1, that are important to the operation of HP-UX 11i. Keep in mind that this list is being enhanced continuously and that these are some features available at the time of this writing:

This is only a partial list of the many advanced features of HP-UX 11i.

For enterprise applications HP-UX has truely reached the level of a fully functional data center operating system that can run any application vital to the operation of a business.

I crafted this book in such as a way that the major HP-UX topics are covered in such a way to help you get up-and-running quickly using some of of HP-UX's advanced features such as partitioning.

The book starts out with extensive coverage of booting HP Integrity and HP 9000 servers. Much of the firmware related to booting differs on these two server families so I cover booting these systems in detail in Chapters 1 and 2 for Integrity and HP 9000 respectively. The Extensible Firmware Interface (EFI) is an important part of booting HP Integrity servers, which can run different operating systems in different partitions, so I spend a significant amount of time covering this topic in Chapter 1.

There are many new functions in HP-UX 11i version 2 that have been introduced and have become mainstream since the previous revision of this book was introduced. Most HP-UX installations now make liberal use of Virtual Partitions (vPars) and hard partitions (called Node Partitions or nPartitions). I cover these technologies extensively in the book since this is currently the most sought after topic related to HP-UX. Many other topics are covered in additional chaptersas you would expect in one of my HP-UX system adminstration books.

I hope you enjoy reading the book and learning the material as much as I did writing it.

There are many Web sites that can assist you in your HP-UX system administration endeavors. I have listed some of the more prominent HP-UX-related Web sites below as they existed at the time of this writing:

HP Developer and Solution Partner Portal (DSPP). This is a web site that has a lot of good software developer information and tools such as the Software Transition Kit (STK). You can download the STK to test your application when moving from one revision of HP-UX to another.
http://www.hp.com/dspp

The Extended Firmware Interface (EFI). This is firmware on Itaniumbased systems that sits between the operating system and platform firmware:
http://www.intel.com/technology/efi/index.htm

IT Resource Center (ITRC) has valuable hardware, software, network, and other kinds of information for HP system administrators:
http://www.itrc.com

Technical documentation, including most all HP-UX documents:
http://www.docs.hp.com

Open Source and Other Sites of Interest

Information on Perl, including sites to download Perl:
http://www.perl.com

Public-domain software that has been ported to HP-UX:
http://hpux.connect.org.uk

There were too many people involved in helping me with this book to list each and every one. I have, therefore, decided to formally thank those who wrote sections of the book and those who took time to review it. I'm still not sure whether it takes more time to write something or review something that has been written to ensure that it is correct.

Marty has been a Solution Architect with Hewlett-Packard Company for eighteen years in the New York area. He has worked with hundreds of Hewlett Packard customers in many industries, including media and entertainmet, consulting, Internet startups, financial services, and manufacturing.

Marty has been widely published in computer industry trade publications. He has published over 50 articles on various computer-related topics. In addition to this book, he is the author of thirteen other Prentice Hall books: Marty holds an M.S. in Information Systems from Polytechnic University (Brooklyn, NY), an M.S. in Management Engineering from the University of Bridgeport (Bridgeport, CT), and a B.S. in Electrical Engineering from Roger Williams University (Bristol, RI).

Martin Whittaker is the Director of System Software Engineering in the Enterprise Unix Division (EUD) of Hewlett-Packard. Martin is responsible for the core kernel, commands and libraries in the HP-UX operating system and for HP-UX performance & scalability, Linux affinity, and ISV enablement.

Martin has been with Hewlett-Packard for over twenty years in a variety of senior technical and management positions in areas including mass storage, Itanium architecture, x86 server performance, I/O systems, the 5Nines:5Minutes high availability program, and operating systems.

Steven supplied the tear-out card for this book.

Steven came to HP as a result of HP's acquisition of Convex. He has been supporting High End Servers since 1989. He is currently in the Remote/E-Delivery Organization working for the Superdome Support Team supporting North American Superdome Customers. Steven is also a certified HP-UX System Administrator and is Linux Professional Institute (LPI) Certified.

Brian came to Hewlett Packard as a result of the HP-Apollo merger in 1989. Until 1993, he was an Offline Technical Marketing Support Engineer, responsible for New Product Introduction for Apollo Domain/OS and HPUX network products. Brian moved into the Chelmsford Response Center in 1993, where he worked as a Senior NETUX Engineer supporting Apollo and HP Network products. After a 2-year hiatus at Sun Microsystems in 1995 and 1996, he returned to HP and re-joined the HP Customer Solution Center NETUX Team in early 1997. Assignments since that time include a variety of roles supporting HP-UX Network Products as a Senior Support Engineer and as a Support Consultant for Mission Critical customers.

Brian lives and works in Lexington Massachusetts, and is married to Wendy Carter, a Registered Pharmacist. They have a son Steve who is an IT Director at the BPS Center in Birmingham, Michigan.

Reviewers and Other Contributors

In all there were about 25 reviewers and additional contributors to this book. I'm not sure what makes someone agree to review a book. You don't get the glory of a contributing author, but it is just as much work. I would like to thank the many people who devoted a substantial amount of time to reviewing this book to ensure that I included topics important to new system administrators and covered those topics accurately.

I don't use a lot of complex notations in the book. Here are a few simple conventions I've used to make the examples clear and the text easy to follow:

One additional convention is that used for command formats. I don't use command formats more than I have to because I could never do as thorough a job of describing commands as the HP-UX manual pages. The manual pages go into detail on all HP-UX commands. Here is the format I use when I cover commands:

I try not to get carried away with detail when covering a command, but there are sometimes many components that must be covered in order to understand a command. Here is a brief description of the components listed above:

command - The name of the executable.

option(s) - Several options may appear across a command line.

Untitled Document Download the Index file related to this title.