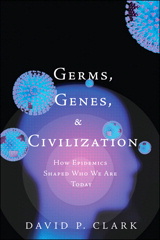 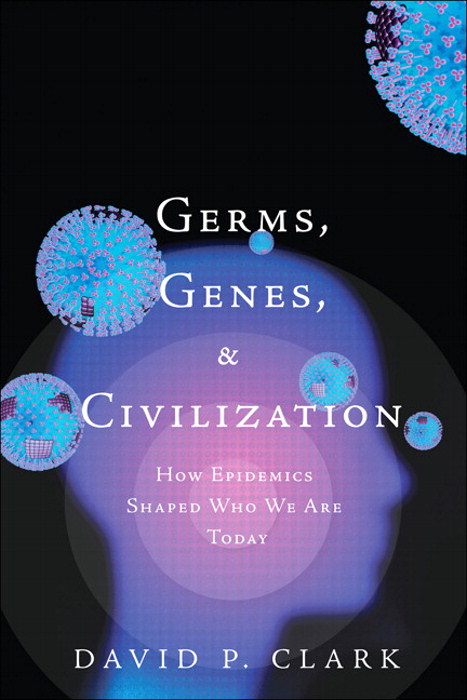 Germs, Genes, & Civilization: How Epidemics Shaped Who We Are Today

How epidemics have shaped human evolution, culture, politics, wars& even religion and ethics!

In Germs, Genes and Civilization, Dr. David Clark tells the story of the microbe-driven epidemics that have repeatedly molded our human destinies. You'll discover how your genes have been shaped through millennia spent battling against infectious diseases. You'll learn how epidemics have transformed human history, over and over again, from ancient Egypt to Mexico, the Romans to Attila the Hun. You'll learn how the Black Death epidemic ended the Middle Ages, making possible the Renaissance, western democracy, and the scientific revolution. Clark demonstrates how epidemics have repeatedly shaped not just our health and genetics, but also our history, culture, and politics. You'll even learn how they may influence religion and ethics, including the ways they may help trigger cultural cycles of puritanism and promiscuity. Perhaps most fascinating of all, Clark reveals the latest scientific and philosophical insights into the interplay between microbes, humans, and society - and previews what just might come next.

Germs, Genes, and Civilizations: Our Debt to Disease

Chapter 1: Introduction: our debt to disease     1

Every cloud has a silver lining: our debt to disease     6

Africa: homeland of mankind and malaria     13

Many human diseases originated in animals     17

Are new diseases virulent to start with?     24

Leprosy is a relatively new disease     30

Virulence and the spread of disease     33

Many diseases become milder with time     40

Development of genetic resistance to disease     47

How do microorganisms become dangerous?     60

Introduction: the importance of biology     67

The origin of diarrheal diseases     70

Cholera comes from the Indian subcontinent     71

The rise and fall of the Indus Valley civilization     74

Cities are vulnerable to waterborne diseases     76

How much did malaria contribute to the fall of Rome?     83

Eating is hazardous to your health     93

Cannibalism is hazardous to your health     97

Fungal diseases and death in the countryside     103

Relation between venereal and skin infections     148

AIDS is an atypical venereal disease     149

Origin of AIDS among African apes and monkeys     150

Worldwide incidence and spread of AIDS     151

The Church, morality, and venereal infections     154

Moral and religious responses to AIDS     155

The ancient history of venereal disease     159

Chapter 8: Religion and tradition: health below or heaven above?     163

Messianic Taoism during the collapse of Han China     185

Buddhism and smallpox in first-millennium Japan     186

The European Middle Ages and the Black Death     187

Cleanliness is next to godliness     191

Lack of domesticated animals in America     197

Exposure of islands to mainland diseases     205

The issue of biological isolation     207

The collapse of the European empires     226

The various types of emerging diseases     232

The supposed re-emergence of tuberculosis     236

Disease and the changing climate     245