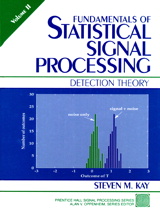 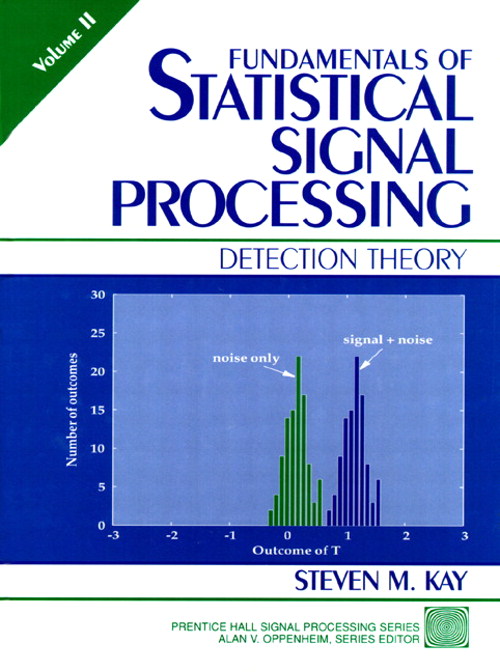 The most comprehensive overview of signal detection available.

This is a thorough, up-to-date introduction to optimizing detection algorithms for implementation on digital computers. It focuses extensively on real-world signal processing applications, including state-of-the-art speech and communications technology as well as traditional sonar/radar systems.

Start with a quick review of the fundamental issues associated with mathematical detection, as well as the most important probability density functions and their properties. Next, review Gaussian, Chi-Squared, F, Rayleigh, and Rician PDFs, quadratic forms of Gaussian random variables, asymptotic Gaussian PDFs, and Monte Carlo Performance Evaluations.

The author then presents exceptionally detailed coverage of composite hypothesis testing to accommodate unknown signal and noise parameters. These chapters will be especially useful for those building detectors that must work with real, physical data. Other topics covered include:

(NOTE: Most chapters begin with an Introduction and Summary.)


Detection Approaches. Linear Model. Choosing a Detector. Other Approaches and Other Texts.

This text is the second volume of a series of books addressing statistical signal processing. The first volume, Fundamentals of Statistical Signal Processing: Estimation Theory, was published in 1993 by Prentice-Hall, Inc. Henceforth, it will be referred to as Kay-I 1993.

This second volume, entitled Fundamentals of Statistical Signal Processing: Detection Theory, is the application of statistical hypothesis testing to the detection of signals in noise. The series has been written to provide the reader with a broad introduction to the theory and application of statistical signal processing. Hypothesis testing is a subject that is standard fare in the many books available dealing with statistics.

These books range from the highly theoretical expositions written by statisticians to the more practical treatments contributed by the many users of applied statistics.

This text is an attempt to strike a balance between these two extremes. The particular audience we have in mind is the community involved in the design and implementation of signal processing algorithms. As such, the primary focus is on obtaining optimal detection algorithms that may be implemented on a digital computer. The data sets are therefore assumed to be samples of a continuous-time waveform or a sequence of data points. The choice of topics reflects what we believe to be the important approaches to obtaining an optimal detector and analyzing its performance.

As a consequence, some of the deeper theoretical issues have been omitted with references given instead. It is the author's opinion that the best way to assimilate the material on detection theory is by exposure to and working with good examples. Consequently, there are numerous examples that illustrate the theory and others that apply the theory to actual detection problems of current interest.

We have made extensive use of the MATLAB scientific programming language (Version 4.2b) Footnote: MATLAB is a registered trademark of The MathWorks, Inc. for all computer-generated results. In some cases, actual MATLAB programs have been listed where a program was deemed to be of sufficient utility to the reader.

Additionally, an abundance of homework problems has been included. They range from simple applications of the theory to extensions of the basic concepts. A solutions manual is available from the author. To aid the reader, summary sections have been provided at the beginning of each chapter. Also, an overview of all the principal detection approaches and the rationale for choosing a particular method can be found in Chapter 11.

Other chapters address detection in nonGaussian noise (Chapter 10), detection of model changes (Chapter 12), and extensions for complex/vector data useful in array processing (Chapter 13). This book is an outgrowth of a one-semester graduate level course on detection theory given at the University of Rhode Island. It includes somewhat more material than can actually be covered in one semester. We typically cover most of Chapters 1--10, leaving the subjects of model change detection and complex data/vector data extensions to the student. It is also possible to combine the subjects of estimation and detection into a single semester course by a judicious choice of material from Volumes I and II.

The necessary background that has been assumed is an exposure to the basic theory of digital signal processing, probability and random processes, and linear and matrix algebra. This book can also be used for self-study and so should be useful to the practicing engineer as well as the student.

The author would like to acknowledge the contributions of the many people who over the years have provided stimulating discussions of research problems, opportunities to apply the results of that research, and support for conducting research.

Exposure to practical problems, leading to new research directions, has been provided by H. Woodsum of Sonetech, Bedford, New Hampshire, and by D. Mook and S. Lang of Sanders, a Lockheed-Martin Co., Nashua, New Hampshire.

Thanks are due to J. Sjogren of the Air Force Office of Scientific Research, whose support has allowed the author to investigate the field of statistical signal processing. A debt of gratitude is owed to all my current and former graduate students. They have contributed to the final manuscript through many hours of pedagogical and research discussions as well as by their specific comments and questions. In particular, P. DjuriÕ{c} of the State University of New York proofread much of the manuscript, and S. Talwalkar of Motorola, Plantation, Florida proofread parts of the manuscript and helped with the finer points of MATLAB.