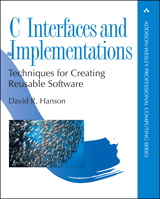 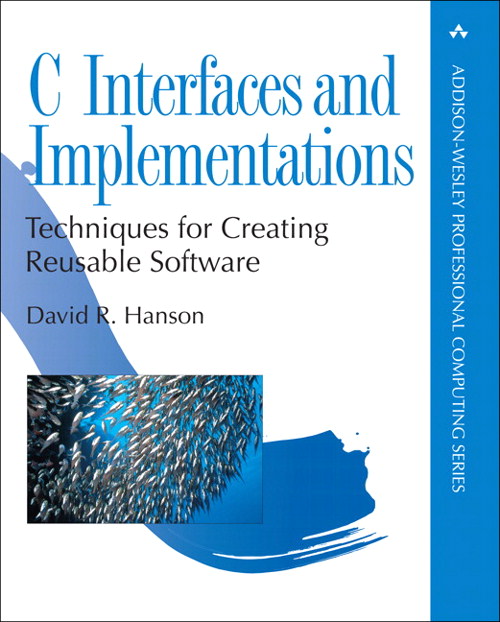 Every programmer and software project manager must master the art of creating reusable software modules; they are the building blocks of large, reliable applications. Unlike some modern object-oriented languages, C provides little linguistic support or motivation for creating reusable application programming interfaces (APIs). While most C programmers use APIs and the libraries that implement them in almost every application they write, relatively few programmers create and disseminate new, widely applicable APIs. C Interfaces and Implementations shows how to create reusable APIs using interface-based design, a language-independent methodology that separates interfaces from their implementations. This methodology is explained by example. The author describes in detail 24 interfaces and their implementations, providing the reader with a thorough understanding of this design approach.

Features of C Interfaces and Implementations:

Click below for Source Code related to this title:
Source Code Resources

Programmers are inundated with information about application programming interfaces, or APIs. Yet, while most programmers use APIs and the libraries that implement them in almost every application they write, relatively few create and disemminate new, widely applicable, APIs. Indeed, programmers seem to prefer to "roll their own" instead of searching for a library that might meet their needs, perhaps because it is easier to write application-specific code than to craft well-designed APIs.

I'm as guilty as the next programmer: lcc, a compiler for ANSI/ISO C written by Chris Fraser and myself, was built from the ground up. (lcc is described in A Retargetable C Compiler: Design and Implementation, Addison-Wesley, 1995.) A compiler exemplifies the kind of application for which it is possible to use standard interfaces and to create interfaces that are useful elsewhere. Examples include interfaces for memory management, string and symbol tables, and list manipulation. But lcc uses only a few routines from the standard C library, and almost none of its code can be used directly in other applications.

There's little support in the C programming language for the interface-based design methodology. Object-oriented languages, like C++ and Modula-3, have language features that encourage the separation of an interface from its implementation. Interface-based design is independent of any particular language, but it does require more programmer willpower and vigilance in languages like C, because it's too easy to pollute an interface with implicit knowledge of its implementation and vice versa.

Once mastered, however, interface-based design can speed development time by building upon a foundation of general-purpose interfaces that can serve many applications. The foundation class libraries in some C++ environments are examples of this effect. Increased reuse of existing software - libraries of interface implementations - reduces initial development costs. It also reduces maintenance costs, because more of an application rests on well-tested implementations of general-purpose interfaces.

The 24 interfaces come from several sources, and all have been revised for this book. Some of the interfaces for data structures - abstract data types - originated in lcc code, and in implementations of the Icon programming language done in the late 1970s and early 1980s (see R. E. Griswold and M. T. Griswold, The Icon Programming Language, Prentice Hall, 1990). Others come from the published work of other programmers; the "Further Reading" sections at the end of each chapter give the details.

Most chapters describe one interface and its implementation; a few describe related interfaces. The "Interface" section in each chapter gives a concise, detailed description of the interface alone. For programmers interested only in the interfaces, these sections form a reference manual. A few chapters include "Example" sections, which illustrate the use of one or more interfaces in simple applications.

The interfaces, examples, and implementations are presented as literate programs; that is, the source code is interleaved with its explanation in an order that best suits understanding the code. The code is extracted automatically from the text files for this book and assembled into the order dictated by the C programming language. Other book-length examples of literate programming in C include A Retargetable C Compiler and The Stanford GraphBase: A Platform for Combinatorial Computing by D. E. Knuth (Addison-Wesley, 1993).

Organization
The material in this book falls into the following broad categories:

Most readers will benefit from reading all of Chapters 1 through 4, because these chapters form the framework for the rest of the book. The remaining chapters can be read in any order, although some of the later chapters refer to their predecessors.

Chapter 1 covers literate programming and issues of programming style and efficiency. Chapter 2 motivates and describes the interface-based design methodology, defines the relevant terminology, and tours two simple interfaces and their implementations. Chapter 3 describes the prototypical Atom interface, which is the simplest production-quality interface in this book. Chapter 4 introduces exceptions and assertions, which are used in every interface. Chapters 5 and 6 describe the memory management interfaces used by almost all the implementations. The rest of the chapters each describe an interface and its implementation.

Instructional Use
I assume that readers understand C at the level covered in undergraduate introductory programming courses, and have a working understanding of fundamental data structures at the level presented in texts like Algorithms in C. At Princeton, the material in this book is used in systems programming courses from the sophomore to first-year graduate levels. Many of the interfaces use advanced C programming techniques, such as opaque pointers and pointers to pointers, and thus serve as nontrivial examples of those techniques, which are useful in systems programming and data structure courses.

This book can be used for courses in several ways, the simplest being in project-oriented courses. In a compiler course, for example, students often build a compiler for a toy language. Substantial projects are common in graphics courses as well. Many of the interfaces can simplify the projects in these kinds of courses by eliminating some of the grunt programming needed to get such projects off the ground. This usage helps students realize the enormous savings that reuse can bring to a project, and it often induces them to try interface-based design for their own parts of the project. This latter effect is particularly valuable in team projects, because that's a way of life in the "real world."

Interfaces and implementations are the focus of Princeton's sophomore-level systems programming course. Assignments require students to be interface clients, implementors, and designers. In one assignment, for example, I distribute Section 8.1's Table interface, the object code for its implementation, and the specifications for Section 8.2's word frequency program, wf. The students must implement wf using only my object code for Table. In the next assignment, they get the object code for wf, and they must implement Table. Sometimes, I reverse these assignments, but both orders are eye-openers for most students. They are unaccustomed to having only object code for major parts of their program, and these assignments are usually their first exposure to the semiformal notation used in interfaces and program specification.

Initial assignments also introduce checked runtime errors and assertions as integral parts of interface specifications. Again, it takes a few assignments before students begin to appreciate the value of these concepts. I forbid "unannounced" crashes; that is, crashes that are not announced by an assertion failure diagnostic. Programs that crash get a grade of zero. This penalty may seem unduly harsh, but it gets the students' attention. They also gain an appreciation of the advantages of safe languages, like ML and Modula-3, in which unannounced crashes are impossible. (This grading policy is less harsh than it sounds, because in multipart assignments, only the offending part is penalized, and different assignments have different weights. I've given many zeros, but none has ever caused a course grade to shift by a whole point.)

Once students have a few interfaces under their belts, later assignments ask them to design new interfaces and to live with their design choices. For example, one of Andrew Appel's favorite assignments is a primality testing program. Students work in groups to design the interfaces for the arbitrary-precision arithmetic that is needed for this assignment. The results are similar to the interfaces described in Chapters 17 through 19. Different groups design interfaces, and a postassignment comparison of these interfaces, in which the groups critique one anothers' work, is always quite revealing. Kai Li accomplishes similar goals with a semester-long project that builds an X-based editor using the Tcl/Tk system (J. K. Ousterhout, Tcl and the Tk Toolkit, Addison-Wesley, 1994).