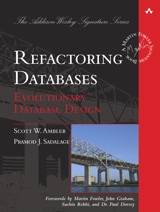 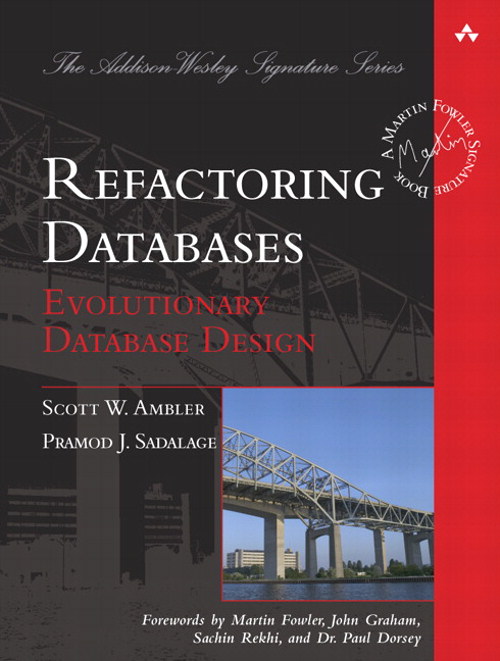 This comprehensive guide and reference helps you overcome the practical obstacles to refactoring real-world databases by covering every fundamental concept underlying database refactoring. Using start-to-finish examples, the authors walk you through refactoring simple standalone database applications as well as sophisticated multi-application scenarios. You’ll master every task involved in refactoring database schemas, and discover best practices for deploying refactorings in even the most complex production environments.

The second half of this book systematically covers five major categories of database refactorings. You’ll learn how to use refactoring to enhance database structure, data quality, and referential integrity; and how to refactor both architectures and methods. This book provides an extensive set of examples built with Oracle and Java and easily adaptable for other languages, such as C#, C++, or VB.NET, and other databases, such as DB2, SQL Server, MySQL, and Sybase.

Using this book’s techniques and examples, you can reduce waste, rework, risk, and cost—and build database systems capable of evolving smoothly, far into the future.

Scott Ambler on the World of Agile Development

About the Authors    xv

Chapter 3: The Process of Database Refactoring    29

Evolutionary, and often agile, software development methodologies, such as Extreme Programming (XP), Scrum, the Rational Unified Process (RUP), the Agile Unified Process (AUP), and Feature-Driven Development (FDD), have taken the information technology (IT) industry by storm over the past few years. For the sake of definition, an evolutionary method is one that is both iterative and incremental in nature, and an agile method is evolutionary and highly collaborative in nature. Furthermore, agile techniques such as refactoring, pair programming, Test-Driven Development (TDD), and Agile Model-Driven Development (AMDD) are also making headway into IT organizations. These methods and techniques have been developed and have evolved in a grassroots manner over the years, being honed in the software trenches, as it were, instead of formulated in ivory towers. In short, this evolutionary and agile stuff seems to work incredibly well in practice.

In the seminal book Refactoring, Martin Fowler describes a refactoring as a small change to your source code that improves its design without changing its semantics. In other words, you improve the quality of your work without breaking or adding anything. In the book, Martin discusses the idea that just as it is possible to refactor your application source code, it is also possible to refactor your database schema. However, he states that database refactoring is quite hard because of the significant levels of coupling associated with databases, and therefore he chose to leave it out of his book.

Since 1999 when Refactoring was published, the two of us have found ways to refactor database schemas. Initially, we worked separately, running into each other at conferences such as Software Development (http://www.sdexpo.com) and on mailing lists (http://www.agiledata.org/feedback.html). We discussed ideas, attended each other's conference tutorials and presentations, and quickly discovered that our ideas and techniques overlapped and were highly compatible with one another. So we joined forces to write this book, to share our experiences and techniques at evolving database schemas via refactoring.

The examples throughout the book are written in Java, Hibernate, and Oracle code. Virtually every database refactoring description includes code to modify the database schema itself, and for some of the more interesting refactorings, we show the effects they would have on Java application code. Because all databases are not created alike, we include discussions of alternative implementation strategies when important nuances exist between database products. In some instances we discuss alternative implementations of an aspect of a refactoring using Oracle-specific features such as the SE,T UNUSED or RENAME TO commands, and many of our code examples take advantage of Oracle's COMMENT ON feature. Other database products include other features that make database refactoring easier, and a good DBA will know how to take advantage of these things. Better yet, in the future database refactoring tools will do this for us. Furthermore, we have kept the Java code simple enough so that you should be able to convert it to C#, C++, or even Visual Basic with little problem at all.

Evolutionary database development is a concept whose time has come. Instead of trying to design your database schema up front early in the project, you instead build it up throughout the life of a project to reflect the changing requirements defined by your stakeholders. Like it or not, requirements change as your project progresses. Traditional approaches have denied this fundamental reality and have tried to "manage change," a euphemism for preventing change, through various means. Practitioners of modern development techniques instead choose to embrace change and follow techniques that enable them to evolve their work in step with evolving requirements. Programmers have adopted techniques such as TDD, refactoring, and AMDD and have built new development tools to make this easy. As we have done this, we have realized that we also need techniques and tools to support evolutionary database development.

Advantages to an evolutionary approach to database development include the following:

There are also several disadvantages to evolutionary database development:

Agility in a Nutshell

Although this is not specifically a book about agile software development, the fact is that database refactoring is a primary technique for agile developers. A process is considered agile when it conforms to the four values of the Agile Alliance (http://www.agilealliance.org). The values define preferences, not alternatives, encouraging a focus on certain areas but not eliminating others. In other words, whereas you should value the concepts on the right side, you should value the things on the left side even more. For example, processes and tools are important, but individuals and interactions are more important. The four agile values are as follows:

How to Read This Book

The majority of this book, Chapters 6 through 11, consists of reference material that describes each refactoring in detail. The first five chapters describe the fundamental ideas and techniques of evolutionary database development, and in particular, database refactoring. You should read these chapters in order:

Each book in the Martin Fowler Signature Series has a picture of a bridge on the front cover. This tradition reflects the fact that Martin's wife is a civil engineer, who at the time the book series started worked on horizontal projects such as bridges and tunnels. This bridge is the Burlington Bay James N. Allan Skyway in Southern Ontario, which crosses the mouth of Hamilton Harbor. At this site are three bridges: the two in the picture and the Eastport Drive lift bridge, not shown. This bridge system is significant for two reasons. Most importantly it shows an incremental approach to delivery. The lift bridge originally bore the traffic through the area, as did another bridge that collapsed in 1952 after being hit by a ship. The first span of the Skyway, the portion in the front with the metal supports above the roadway, opened in 1958 to replace the lost bridge. Because the Skyway is a major thoroughfare between Toronto to the north and Niagara Falls to the south, traffic soon exceeded capacity. The second span, the one without metal supports, opened in 1985 to support the new load. Incremental delivery makes good economic sense in both civil engineering and in software development. The second reason we used this picture is that Scott was raised in Burlington Ontario—in fact, he was born in Joseph Brant hospital, which is near the northern footing of the Skyway. Scott took the cover picture with a Nikon D70S.