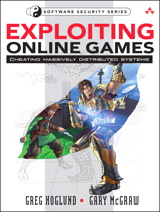 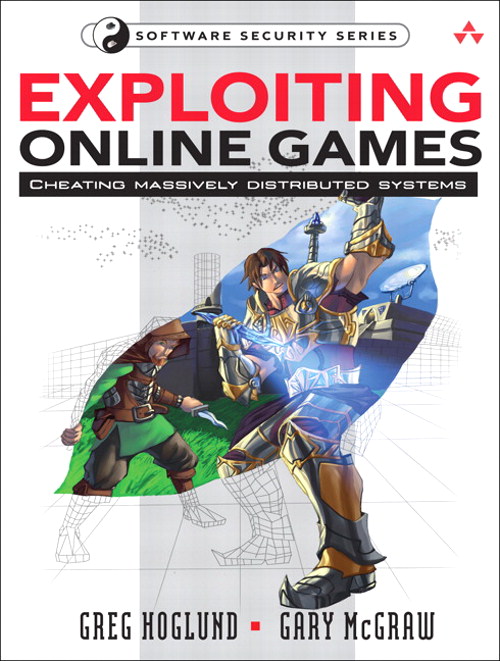 "Imagine trying to play defense in football without ever studying offense. You would not know when a run was coming, how to defend pass patterns, nor when to blitz. In computer systems, as in football, a defender must be able to think like an attacker. I say it in my class every semester, you don't want to be the last person to attack your own system--you should be the first.

"The world is quickly going online. While I caution against online voting, it is clear that online gaming is taking the Internet by storm. In our new age where virtual items carry real dollar value, and fortunes are won and lost over items that do not really exist, the new threats to the intrepid gamer are all too real. To protect against these hazards, you must understand them, and this groundbreaking book is the only comprehensive source of information on how to exploit computer games. Every White Hat should read it. It's their only hope of staying only one step behind the bad guys."

"If we're going to improve our security practices, frank discussions like the ones in this book are the only way forward. Or as the authors of this book might say, when you're facing off against Heinous Demons of Insecurity, you need experienced companions, not to mention a Vorpal Sword of Security Knowledge."

"Historically, games have been used by warfighters to develop new capabilities and to hone existing skills--especially in the Air Force. The authors turn this simple concept on itself, making games themselves the subject and target of the 'hacking game,' and along the way creating a masterly publication that is as meaningful to the gamer as it is to the serious security system professional.

"Massively distributed systems will define the software field of play for at least the next quarter century. Understanding how they work is important, but understanding how they can be manipulated is essential for the security professional. This book provides the cornerstone for that knowledge."

"Like a lot of kids, Gary and I came to computing (and later to computer security) through games. At first, we were fascinated with playing games on our Apple ][s, but then became bored with the few games we could afford. We tried copying each other's games, but ran up against copy-protection schemes. So we set out to understand those schemes and how they could be defeated. Pretty quickly, we realized that it was a lot more fun to disassemble and work around the protections in a game than it was to play it.

"With the thriving economies of today's online games, people not only have the classic hacker's motivation to understand and bypass the security of games, but also the criminal motivation of cold, hard cash. That's a combination that's hard to stop. The first step, taken by this book, is revealing the techniques that are being used today."

"If you're playing online games today and you don't understand security, you're at a real disadvantage. If you're designing the massive distributed systems of tomorrow and you don't learn from games, you're just plain sunk."

"This book offers up a fascinating tour of the battle for software security on a whole new front: attacking an online game. Newcomers will find it incredibly eye opening and even veterans of the field will enjoy some of the same old programming mistakes given brilliant new light in a way that only massively-multiplayer-supermega-blow-em-up games can deliver. w00t!"

If you are a gamer, a game developer, a software security professional, or an interested bystander, this book exposes the inner workings of online-game security for all to see.

From the authors of the best-selling Exploiting Software, Exploiting Online Games takes a frank look at controversial security issues surrounding MMORPGs, such as World of Warcraft™ and Second Life®. This no-holds-barred book comes fully loaded with code examples, debuggers, bots, and hacks.

Written by the world's foremost software security experts, this book takes a close look at security problems associated with advanced, massively distributed software. With hundreds of thousands of interacting users, today's online games are a bellwether of modern software. The kinds of attack and defense techniques described in Exploiting Online Games are tomorrow's security techniques on display today.

Why Are We Doing This?     xxii
Where Do We Draw the Line?     xxiii
What's in the Book?     xxiv
The Software Security Series     xxvi
Contacting the Authors     xxvii

About the Authors     xxxiii