Ultimate Beginner's Guide to Minecraft: Crafting, Mining, and Survival, The 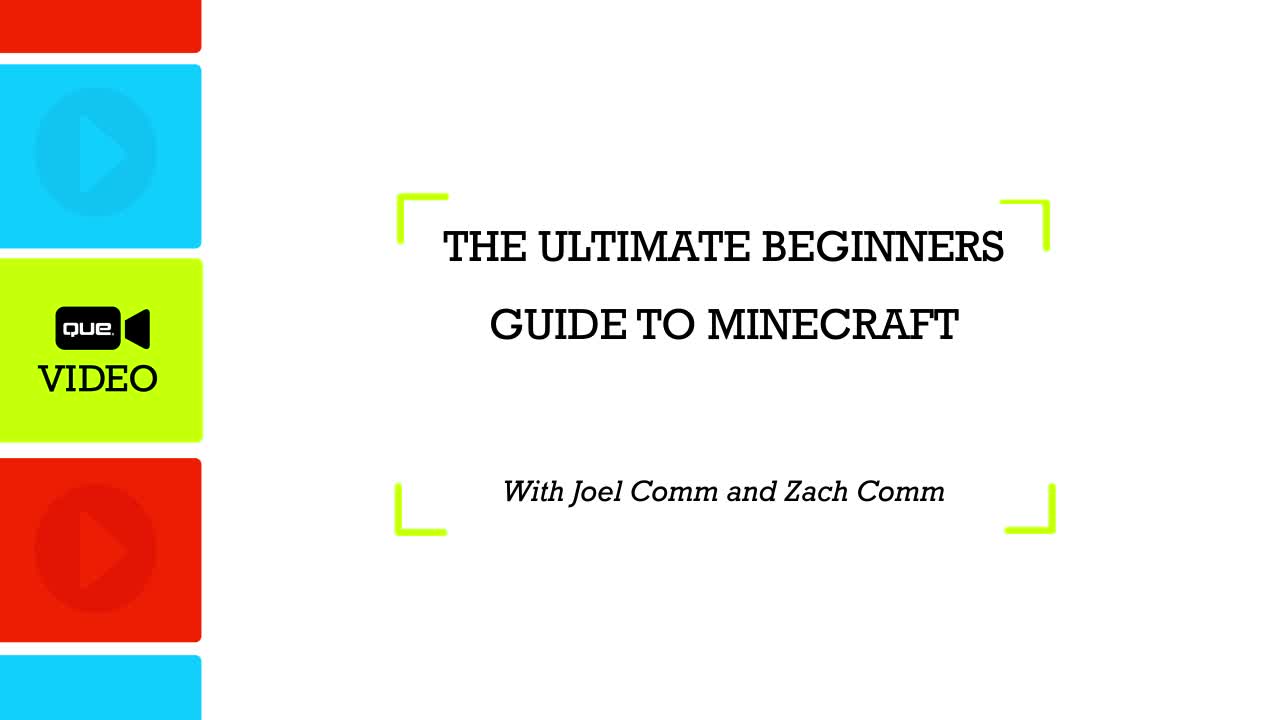 DRM-Free Video Downloads. Purchase and immediately download individual lessons from this video. Make your lesson selections below and click on the Buy button.

Videos can be viewed on: Windows 8, Windows XP, Vista, 7, and all versions of Macintosh OS X including the iPad, and other platforms that support the industry standard h.264 video codec. Requires the free QuickTime Player software.

Master the Minecraft world–just watch! From Redstone to skellies, here's you need to know to survive, farm, mine, trade, and more… including your complete combat school!

Minecraft: this universe is yours. These videos will make it yours. You have world-class guides now: Joel Comm and Zach Comm. They know the terrain. The traps. The gameplay. So will you. Just watch: it's all here. Get registered. Master the interface. Explore the world. Grab the tools. Combat the skellies. Build your shelter. Gather. Eat. Dig. Fight. Survive. Trade. Farm. Mine. Thrive. New around here? Worry not: this is The Ultimate Beginners Guide to Minecraft: Crafting, Mining, and Survival. Want to be a total expert? Three hours: that's all it takes. Combat school. Pro-level spelunking. Utility mobs. Animal husbandry. Automated farming. Redstone circuits. Ancient temples. All here. This is power. This is Minecraft. This is yours.

Joel Comm is an internet pioneer who has created profitable websites and technology businesses since 1995. His first website, WorldVillage.com, focused on game and educational software reviews. He is co-creator of ClassicGames.com, which was sold to Yahoo! in 1998 and is now the foundation of the popular Yahoo! Games site. A New York Times best-selling author of nine titles with twelve foreign translations and over 40 ebooks and special reports, he is a prolific entrepreneur, speaker and consultant to the tech sector. Zach Comm, a game savant, has played over 1,000 computer games, and is proficient in game theory, design and mechanics. He runs the GameCheetah.com gaming blog, and is preparing to launch the new RocketStomp.com game site.

Get started fast! Discover how Minecraft works, register your account, download the software, launch the game, control your graphics options, and set your game mode: survival, creative, or hardcore.

Learn all you need to know to defeat every adversary Minecraft sends your way! Successfully combat Creepers, Skellies, Zombies, Endermen, Ghasts, Blazes, Magma Cubes, and Zombie Pigmen… survive dangers in the Overworld and the Nether… craft and control utility mobs: both snow and iron golems!

Explore ancient temples, and grab their incredible rewards–without getting trapped! Build a highly-efficient farm, complete with automated Redstone harvesting… breed ocelots and wolves… use dogs in combat, and more!

1.1 Introduction: Welcome to Minecraft for Beginnners

2.5A Basic Farming (Gather and plant seeds; use a hoe to till soil)

2.5B Basic Farming (Continued: Wheat, and harvesting its fully-grown form)

2.6A Farm Animals (Chickens, pigs, cows, and items that drop from them)

2.9 Villages, Their Resources, and Villagers

3.1 What to bring on a lengthy mining trip

3.3 Exploring the Depths (Discovery of Redstone; nuances of mining)

3.4A Ravines (Naturally-generated canyons and their resources)

4.1 Combat School: Overworld (Creepers, skellies, and how to combat them)

4.2 Combat School: Overworld (Continued: Zombies and how to combat them)

4.5 Combat School: Nether (Continued: Blazes and how to battle them)

4.7 Combat School: Nether (Continued: Zombie Pigmen and Considerations in Choosing to Fight Them)

5.2A Advanced Farming (Structure of a highly efficient farm)

5.2B Advanced Farming (Continued: Types of crops and how to most effectively plant them)

5.5A Saddle Up (Horses, including how to tame, ride, equip and breed them)

5.7B Wolves (Continued: Dogs in combat)

5.8 In Closing (Montage of the world we've created over years; closing summary)

A Beginner's Guide to Writing Minecraft Plugins in JavaScript