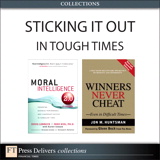 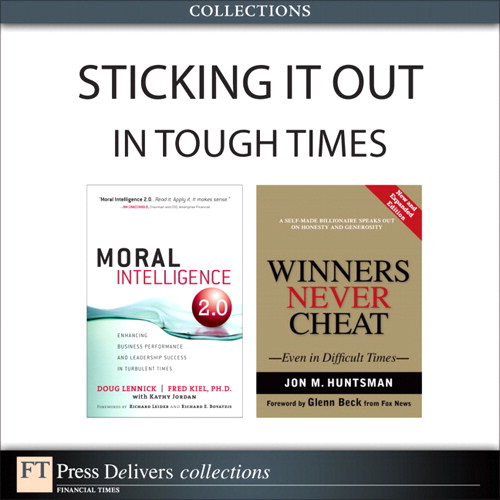 Sticking It Out in Tough Times (Collection)

In Moral Intelligence 2.0, Lennick and Kiel extensively identify the moral components at the heart of the recent financial crisis and illuminate the monetary and human costs of failed moral leadership in global finance, business, and government. The authors begin by systematically defining the principles of moral intelligence and the behavioral competencies associated with them. Next, they demonstrate why sustainable optimal performance—on both an individual and organizational level—requires the development and application of superior moral and emotional competencies. Using many new examples and real case studies, as well as new interviews with key business leaders, they identify connections between moral intelligence and higher levels of trust, engagement, retention, and innovation. Readers will find specific guidance on moral leadership in both large organizations and entrepreneurial ventures, as well as a new, practical, step-by-step plan for measuring and strengthening every component of moral intelligence—from integrity and responsibility to compassion and forgiveness.

Who's Jon Huntsman? Someone who started with practically nothing, and made it to Forbes' list of America's Top 100 richest people: a self-made multi-billionaire. Winners Never Cheat: Even In Difficult Times presents the lessons of his lifetime in business: a life that has included the best of times and the worst. The first edition became an instant classic; now, Huntsman has thoroughly updated it with new chapters on maintaining your principles in difficult times, when dishonest "sharks" seem to be everywhere. This is no mere exhortation: it's as practical as a book can get. It's about how you listen to your moral compass, even as others ignore theirs. It's about building teams with higher values…sharing success and taking responsibility…earning the rewards that only come with giving back. Huntsman built his career and fortune on these principles. You don't live them just to "win": you live them because they're right. But in an age of cheating and scandal, Huntsman's life proves honesty is more than right: it's your biggest competitive differentiator. So, consider what kind of person you want to do business with. Then, be that person and use this book to get you there. All author royalties from this book go to the Huntsman Cancer Foundation.

Chapter 12: Moral Intelligence for the Entrepreneur     223

Appendix A: Strengthening Your Moral Skills     251

Circumstances may change but your values shouldn't.

Everything we need for today's marketplace we learned as kids.

We know darn well what is right and wrong.

Compete fiercely and fairly--but no cutting in line.

It's high time to corral the corporate lawyers.

There are many temptations, but reminders help.

Surround yourself with associates who have the courage to say no.

Revenge is unhealthy and unproductive. Learn to move on.

Chapter Nine       Graciousness Is Next to Godliness  139

Operate businesses and organizations as if they're family owned.

Chapter Eleven  The Obligation to Give Back  171

Nobody is completely self-made; return the favors and good fortune.