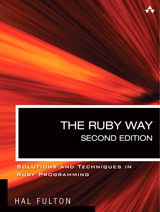 Ruby is an agile object-oriented language, borrowing some of the best features from LISP, Smalltalk, Perl, CLU, and other languages. Its popularity has grown tremendously in the five years since the first edition of this book.

The Ruby Way takes a “how-to” approach to Ruby programming with the bulk of the material consisting of more than 400 examples arranged by topic. Each example answers the question “How do I do this in Ruby?” Working along with the author, you are presented with the task description and a discussion of the technical constraints. This is followed by a step-by-step presentation of one good solution. Along the way, the author provides detailed commentary and explanations to aid your understanding.

•    An overview of Ruby, explaining terminology and basic principles

•    Operations on hashes, arrays, and other data structures such as stacks, trees, and graphs

•    Ruby development tools such as IDEs, documentation tools, and more

The source code for the book can be downloaded from www.rubyhacker.com

Hal Fulton has worked for over 15 years with variousforms of Unix, including AIX, Solaris, and Linux. He was first exposed to Ruby in 1999, and in 2001 he began work on the first edition of this book–the second Ruby book published in the English language. He has attendednumerous Ruby conferences and has given presentations at several of those, including the first European Ruby Conference.

He has two degrees in computer science from the University of Mississippi and taught computer science for four years before moving to Austin, Texas to work as a contractor for variouscompanies, including IBM Austin.  Hal currently works at Broadwing Communications in Austin, Texas, maintaining a large data warehouse and related telecom applications, working daily with C++, Oracle, and, of course, Ruby.

7   Working with Times and Dates

8   Arrays, Hashes, and Other Enumerables

11 OOP and Dynamic Features in Ruby