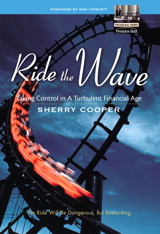 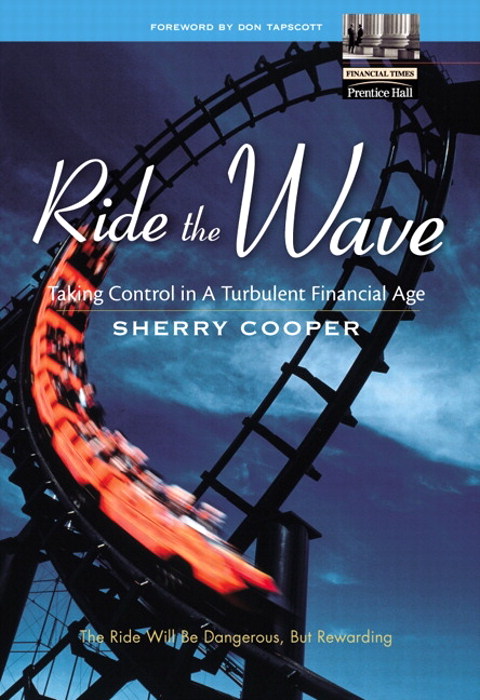 Ride the Wave: Taking Control in a Turbulent Financial Age

The ride will be dangerous, but rewarding.

Yes, says Cooper, we are in the early stages of a "long boom": in 20 years, the world will be a far wealthier place. But there will be big losers, too: those who can't handle the terrifying volatility that's coming too. Cooper shows you what's coming, why it's coming, and what you should do to profit from tomorrow's opportunities--and manage tomorrow's daunting risks.

Hypergrowth in the Internet in 2003 Will you be ready for the real Internet and e-commerce revolution? The synchronized global economy What globalization really means—and what it will mean Sex and the economy The massive, hidden economic implications of demographic shifts Nanotech, biotech, photonics, fuel cells, and beyond The next disruptive technologies—and the massive opportunities they portend "Me, Inc." Building your own personal brand in the age of acceleration and turbulence. Today's road to financial security What you must do now to successfully navigate the coming turbulence

Buckle up: you're in for the most turbulent economic ride of your life!

Wild economic times are coming. Exciting times. Dangerous times. They're the harbinger of a radically new global economic and social system, one that will deliver unprecedented wealth. But, before we get there, we'll have to survive years of gut-wrenching economic volatility. In Ride the Wave, renowned economic analyst Sherry Cooper gives you the tools and insights you need to profit in this new age of turbulence—no matter how wild it gets.

Well known for her appearances on CNN, CNBC, and PBS, Cooper makes sense of the "macro-level" trends hidden just beneath the surface, obscured by today's short-term market swings. Cooper brings global sweep and long-term perspective to the causes and effects that really matter. You'll discover how massive demographic, sociopolitical, and technological changes are likely to impact tomorrow's world economy. Most important, you'll learn what it means to you—and what to do about it!

"Sherry Cooper is a dynamo-bright, savvy and plugged into the heart of our turbulent economic times."

"I need Sherry because she keeps me up on the implications on the New Economy, and she provides a good read in the process."

—The Honorable Paul Volcker, former Chairman of the Federal Reserve


I. SPIRAL UP, SPIRAL DOWN.

The Internet Revolution - It Is Still Early Days.
The Best Is Yet to Come - The Knowledge Explosion.

The Synchronized Global Economy.
Global Capitalism - Problems and Promises.
The Global Leader in the Technology Revolution -
Will the Lead Narrow?
The U.S. Demographic Advantage.


V. REALIZING YOUR POTENTIAL IN A RAPIDLY CHANGING WORLD.

This is a time of great confusion in business. During the latter partof the 1990s, corporate imagination was swept away by the dotcom wave. The obvious revolutionary power of the Internet waschannelled primarily into myriad start-ups that seemingly challengedincumbents in every industry from bookselling to banking. Venture capitalist financing flowed fast and freely, and many people forgot (assuming they ever knew) about business fundamentals. Momentum investing set in. Alan Greenspan's admonishment of "irrational exuberance" was an understatement. And in early 2000 the bubble burst.

Having been reminded that the laws of business gravity continue toapply, many managers have wisely returned to the fundamentals. Theyare focusing on customer value, creating viable business models andstrategies, and achieving operational efficiencies.

But a return to the fundamentals in itself is insufficient to ensurebusiness success. We cannot just turn back the clock. Many executives Iwork with still believe the Internet has revolutionary significance, which it does. And where will the turmoil in capital markets lead? Must we go through a recession? Business leaders need to understand the newbusiness context before they can develop effective strategies. This is the importance of Sherry Cooper's book. She has few rivals in articulating the big picture within which we must all operate.

My view is that we are not at the end of profound change. We are justbeginning. For decades, the starting point for strategic thinking has been the standalone vertically integrated corporation. These powerfulcompanies do everything from soup to nuts and dominate the competitive landscape. We think of them as intrinsic to the economy and theyprovide the context for theories about competitive strategy.

Internally these corporations have always operated more as planned economies rather than efficient marketplaces, and we are now beginning to appreciate that they were actually clumsy, costly, and inefficient. (Dilbert captures this well.) But during the last century such companies prospered because they were superior to any other model of production. It was cheaper and simpler for companies to perform the maximum number of functions in-house, rather than incurring the high cost, hassle, and risk of constantly searching, contracting, understanding, collaborating, and executing transactions with outside partners.

This is no longer the case. Because of the Internet, a new business architecture is rising to challenge the industrial-age corporation. My colleagues and I call it the "business web," or "b-web," and we define it as any system--of suppliers, distributors, service providers, infrastructure providers, and customers--that uses the Internet as the basis for business communications and transactions. In the most successful business webs, each constituent focuses on its core competence. We have studied hundreds of examples of b-webs, and in industry after industry, these new vehicles for value creation are proving more supple, cost-efficient, and innovative than their traditional competitors.

Because of this, myriad new models have emerged that are different from the industrial age template. Hundreds of successful examples show that companies can now focus on their core capabilities and partner for the rest. Siebel Systems, for example, one of the fastest-growing companies in America, has established a vast partner network to deliver a unique assemblage of customer, supplier, and employee relationship software. Tom Siebel argues that its b-web is the most important element is his company's success, saying, "We only have 8000 people on our payroll, but more than 30,000 people work for us." The relatively small core company creates software products and orchestrates an extensive b-web comprising consultants, technology providers, implementers, suppliers, and vendors that take its products to the global marketplace. The result: 1400 percent growth in the past three years.

The CEO of Boeing says his company is a systems integrator, not an aircraft manufacturer. Dell shifted from classic mass production to a shop production model, introducing entirely new business concepts like the demand chain. LEGO through its Mindstorm robot products brings customers into its business web, enabling them to co-create products. Schwab moved from being a tightly integrated financial services provider to an Internet-based aggregator of financial services and stole huge market share. IBM is a computer company that doesn't manufacture computers--its partners do.

Simply deploying Intranets within corporate walls fails to capture b-web power because they fail to capture the tonic of the marketplace. Most of what companies do is not based on their core competencies. They attempt to build up and "make do" with design, manufacturing, marketing, and other capabilities that are often not best of breed in the open market. Now with the Net, business functions or large projects can be reduced to smaller components and farmed out (often simultaneously) to more specialized companies around the world with virtually no transaction costs.

This harnesses the enormous benefits of the competitive environment. Suppliers strive to reduce costs and increase quality and innovation. They know there are other specialized workers and companies around the world keen to do the work.

By contrast, insisting a project stay in-house often means it is comparatively more difficult to mobilize resources, even with a high-performance Intranet. Employees are pressed into jobs unrelated to their skills, as managers try to "make do" with the workers on hand. Alternately, adding new employees to the payroll is time-consuming and costly. Approvals must be sought, reporting structures developed, workspace arranged, and so on. Every manager knows these internal rigidities increase corporate costs and stifle innovation.

To prosper in today's economy the business strategist needs new tools--including strategic concepts and analytical methods--to comprehend and exploit the unprecedented business architectures suddenly available. This was almost a non-issue when the superiority of the industrial corporation was taken for granted. It was just assumed, for example, that most resources would be internal to the company. A business' human resources strategy dealt with people on the payroll.

Simple. But in the Internet era firms can profit enormously from resources that don't belong to them.

Issues such as partnering, corporate boundaries, distribution channels, industry restructuring, and strategic repositioning are suddenly much more complex. The b-school case studies of five or ten years ago no longer apply. This is why Ride the Wave is such a solid contribution to understanding the new economic context. In the increasingly inter-networked world, business leaders require a firm grip on the total environment in which they are operating. Read and prosper.

Europe's Financial Crisis: A Short Guide to How the Euro Fell into Crisis and the Consequences for the World (paperback)