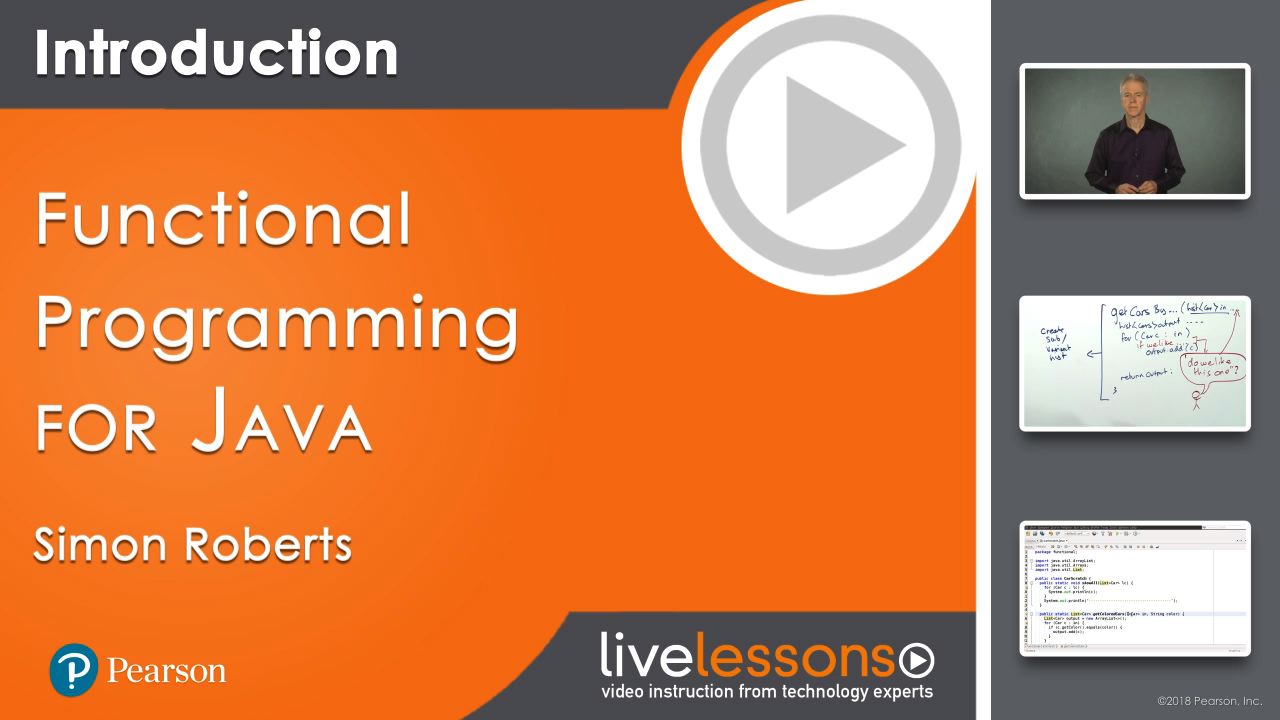 "Excellent material. I really liked these videos, that aren't only about learning language features, but also about understanding abstractions and discussing software design."

Functional Programming for Java LiveLessons is a complete resource where each new concept is introduced gradually, based on examples that start in the familiar object-oriented style. A solid foundation is created before adding on more complicated concepts. The discussion then examines how this example might be improved and introduces functional concepts in small steps, building in relevant code as you go and in a way that emphasizes understanding. Exercises are suggested throughout, allowing the viewer to stop and try solving the examples on their own before continuing. The code for this course is available as a GIT repository and viewers are encouraged to work with it to further their understanding.

The course begins with Lesson 1, “From an OO design pattern to a functional foundation.” This lesson examines solving a seemingly simple problem using regular object-oriented approaches. The discussion develops an increasingly flexible solution, which forms a bridge to a key pattern in functional programming style.

Lesson 2, “Building more functional concepts,” starts by looking at where code should be located for maximum maintainability. In the process, the discussion discovers how behavior can be passed into and out of methods. This lesson investigates the singleton and the factory; and compares those with constructors. It reviews many syntax features, including nested classes, private nested classes, and anonymous inner classes. It then introduces lambda expressions, their requirements, and syntactic variations. This lesson also looks at writing generic methods so as to create even more general code, and get the benefits of consistency checking through the compiler.

Lesson 3, “The power of combinations and modifications,” extends the idea that behavior can be passed as an argument to, and returned from, a method to show that such behavior can actually be computed, rather than fixed. This lesson shows how to build behavior out of other existing behaviors, modify existing behaviors, and combine them in new ways. As a result, you’ll learn to re-use code at the level of a function, rather than at the level of a class or object.

Lesson 4, “Working with pure functions,” investigates pure functions; discovering what they are, and how to address the seeming limitations of them. It will discuss a key technique in this kind of programming. The discussions will build a simple, readily comprehensible model of one of Java’s key APIs. In the process, you’ll gain a solid understanding of the functional programming concept called a “monad.”

Lesson 5, “Streams API,” takes the monad concept learned in Lesson 4 and completes your understanding, so you can use the Streams API to solve potentially large-scale data processing problems.

Lesson 6, “Advanced patterns and exception handling,” looks at the problem of how to handle exceptions that might arise during stream processing. In building the story, you’ll strengthen your understanding of how function composition and adaptation is used to solve real programming problems.