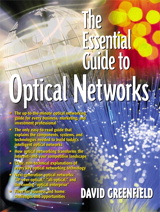 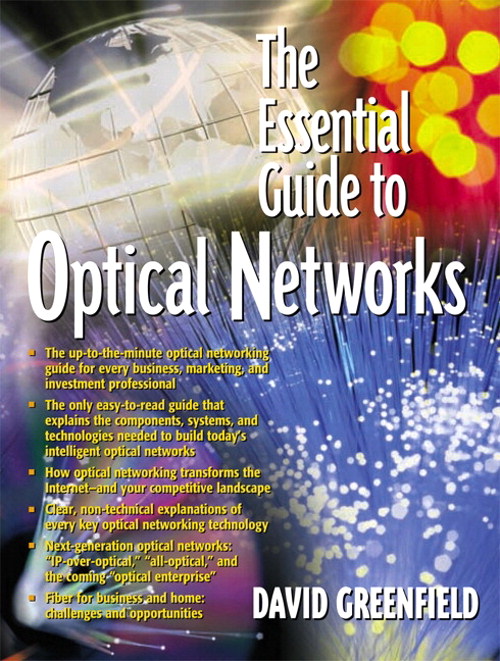 Essential Guide to Optical Networks, The

The up-to-the-minute briefing on optical networking for every non-technical professional and business decision-maker.

Optical networks are transforming the Internet, making it possible to deliver amazing amounts of bandwidth for every application, from business to entertainment—and beyond. Now there's an easy-to-understand guide to optical networking for every non-technical professional! Network Magazine International Technology Editor David Greenfield offers crisp, witty explanations of everything you need to know: infrastructure, trends, applications—and the new breakthroughs that will make optical networks even more powerful and ubiquitous.

Whether you're a manager, consultant, sales, marketing, or PR professional, investor, or student, you need to understand the extraordinary power and impact of tomorrow's optical networks. The Essential Guide to Optical Networks explains these pivotal technologies from a business standpoint-without hype, jargon, or math!


The Public Network in Brief. Traffic Changes. Out with the Old. In with the New. Optical Computers. Optical Services. Short Cuts.

2. The Basics of Communications.

Welcome! If you've come this far, you must have an interest in the fascinating world of optical networking. It's a world that stands to revolutionize computer networks and the people who use them—you and I.

Despite the huge implications and the captivating technology involved in optical networks, surprisingly little has been written for the nontechnical audience. Engineers and like-minded folk will find numerous books out there, with all the right formulas and equations to make a normal man's eyes bulge, but for those of us who think in words and not square roots, optical networking remains a largely opaque field. Some noise gets through about terabits of capacity, historic changes, and the like, but darned little is intelligible to the reader outside of the optical club.

Hence this book. In its pages we'll explore the fascinating worlds of lasers, switches, and optical networks. We'll cover the basics of fibers and the components needed to connect them. We'll get a close-up look at the best-known optical technology—wave-division multiplexing—and how it works.

But today's optical networks aren't just about fibers strung together. All sorts of new technologies are making it easier for businesses and consumers to jump on a light-speed connection at a more affordable price. Other technologies are changing the very way carriers build the heart or core of the networks. Some are even enabling optics to alter their very characteristics, depending on the types of data.

Of course, there's a tradeoff. The information here won't enable you to go out and build an optical network. If that's your goal, you'll find a bunch of other books out there that can help. But if you're in marketing or sales, law, research, human resources, or project management-if you're a student, an engineer looking to switch areas, or anyone looking for an overview, refresher, or just a plain easy read-you've come to the right place.

To those ends, The Essential Guide to Optical Networks is designed to be accessible on multiple levels. The text of the book should be understandable to those with a non-mathematical or scientific background. Those who crave formulas will get them in our "Dr. Geek" sidebars spread throughout the book. You'll also find key words bolded in the text; these are later defined in the glossary for easy reference. Cartoons appearing in each chapter present the lighter side of optical networking (yes, there is such a thing).

Those without any knowledge of the industry would do well to start out with Part I, Chapter 1; it provides an overview and explains where we're going. Chapter 2 is meant for those of us who might have had a little exposure to the world of networking or might be familiar with voice networks, but have less knowledge of data networks. We'll walk through the various technologies that are needed to build corporate networks and that increasingly are being used for building the new public network.

Part II is aimed at those looking to understand the bread-and-butter of optical networks-the fibers and components. Chapter 3 explains the relevant physics involved in sending a signal down an optical fiber. In Chapter 4, we'll look at the types of fibers used and the challenges in sending signals down those fibers. Chapter 5 explains the different kinds of components for building out fiber networks from amplifiers to lasers, filters to couplers. Then we wrap up in Chapter 6 with a look at the different kinds of switches used to build the public network.

It's a fascinating world. I hope you enjoy reading about it as much as I've enjoyed writing about it.