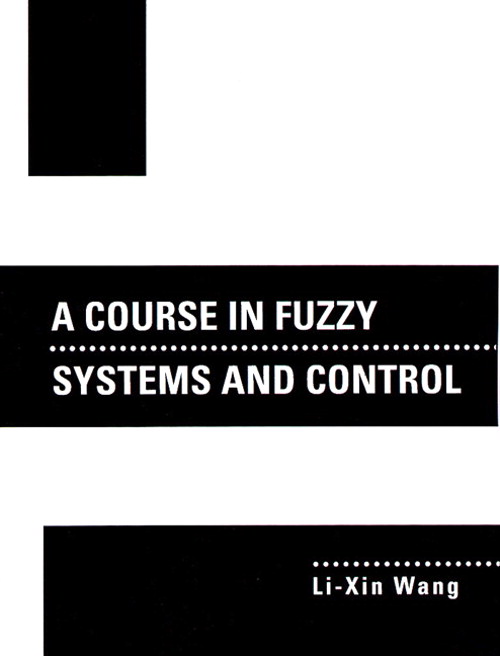 Course In Fuzzy Systems and Control, A

I. THE MATHEMATICS OF FUZZY SYSTEMS AND CONTROL.

4. Fuzzy Relations and the Extension Principle.


From Classical Logic to Fuzzy Logic. The Compositional Rule of Inference. Properties of the Implication Rules. Summary and Further Readings. Exercises.

II. FUZZY SYSTEMS AND THEIR PROPERTIES.


The Formulas of Some Classes of Fuzzy Systems. Fuzzy Systems As Universal Approximators. Summary and Further Readings. Exercises.

10. Approximation Properties of Fuzzy Systems I.


Design of the Fuzzy System. Derivation of the Recursive Least Squares Algorithm. Application to Equalization of Nonlinear Communication Channels.

Researchers are trying to explain why the practical results are good, to systematize the existing approaches, and to develop more powerful ones. As a result of these efforts, the whole picture of a fuzzy systems and fuzzy control theory is becoming clearer. Although there are many books on fuzzy theory, most of them are either research monographs which concentrate on special topics, or collections of papers, or books on fuzzy mathematics. We desperately need a real textbook on fuzzy systems and control which provides the skeleton of the field and summarizes the fundamentals.

This book, which is based on a course developed at the Hong Kong University of Science and Technology, is intended as a textbook for graduate and senior students, and as a self-study book for practicing engineers.

When writing this book, we keep the following requirements in mind: Well- Structuredness: This book is not intended as a collection of existing results on fuzzy systems and fuzzy control; rather, we first establish the structure which a reasonable theory of fuzzy systems and fuzzy control should follow, and then fill in the details. For example, when studying fuzzy control systems, we should consider the stability, optimality, and robustness of the systems, and classify the approaches according to whether the plant is linear, nonlinear, or modeled by fuzzy systems.

Fortunately, the major existing results fit very well into this structure and are therefore covered in details in this book. Because the field is not mature as compared with other mainstream fields, there are holes in the structure for which no results exist. For these topics, we either provide our preliminary approaches, or point out that the problems are open.

Clearity and Preciseness: Clear and logic presentation is crucial for any book, especially for a book associated with the word ``fuzzy.'' Fuzzy theory itself is precise; the ``fuzziness'' appears in the phenomena that fuzzy theory tries to study. Once a fuzzy description (for example, ``hot day'') is formulated in terms of fuzzy theory, nothing will be fuzzy anymore. We pay special attention to use precise languages to introduce the concepts, to develop the approaches, and to justify the conclusions.

Practicality: We do not forget that the driving force for fuzzy systems and control is practical applications. Most approaches in this book are tested for problems which have practical significance. In fact, a main objective of the book is to teach the students or practicing engineers how to use the fuzzy systems approaches to solve engineering problems in control, signal processing, and communications.

Richness and Rigor: This book should be intelligently challenging for students. In addition to the emphasis on practicality, many theoretical results are given (which, of course, have practical relevance and importance). All the theorems and lemmas are proven in a mathematically rigorous fashion, and some efforts have to be taken for an average student to comprehend the details.

Easy to Use as A Textbook: To facilitate its use as a textbook, this book is written in such a style that each chapter is designed for a one-and-half hour lecture. Sometimes, three chapters may be covered by two lectures, or vice versa, depending upon the emphasis of the instructor and the background of the students. Each chapter is attached with some exercises and mini-projects which, as in many other textbooks, form an integrated part of the text.

The book is divided into six parts.
The first part (Chapters 2-6) introduces the fundamental concepts and principles in the general field of fuzzy theory which are particular useful in fuzzy systems and fuzzy control.

The third part (Chapters 12-15) introduces four methods for designing fuzzy systems from sensory measurements, and all these methods are tested for a number of control, signal processing, or communication problems.

Finally, Part VI (Chapters 27-31) reviews a number of topics which are not included in the main structure of the book, but are important and strongly relevant to fuzzy systems and fuzzy control.

The book can be studied in many ways, according to the particular interests of the instructor or the reader. Chapters 1-15 cover the general materials which can be applied to a variety of engineering problems. Chapters 16-26 are more specialized in control problems. If the course is not intended as a control course, then some materials in Chapters 16-26 may be omitted, and the time saved may be used for a more detailed coverage of Chapters 1-15 and 27-31. On the other hand, if it is a control course, then Chapters 16- 26 should be studied in details. The book can also be used, together with a book on neural networks, for a course on neural networks and fuzzy systems. In this case, Chapters 1-15 and a selected topics from Chapters 16-31 may be used for the fuzzy system half of the course. If a practicing engineer wants to learn fuzzy systems and fuzzy control quickly, then the proofs of the theorems and lemmas may be skipped. This book has benefited from many colleagues, students, and friends. First of all, I would like thank my advisors Lotfi Zadeh and Jerry Mendel for their continued encouragements. I would like to thank Karl {\AA str\"{o m for sending his student Mikael Johansson to help me to prepare the manuscript during the summer of 1995. Discussions with Kevin Passino, Frank Lewis, Jyh-Shing Jang, Hua Wang, Hideyuki Takagi, John Yen and other researchers in fuzzy theory have helped the organization of the materials. The book also benefited from the students who took the course at HKUST. The supports for the author from the Research Grants Council of Hong Kong are greatly appreciated. Finally, I would like to express my gratitude to my Department at HKUST for providing the nice research and teaching environment. Especially, I would like to thank my colleagues Xiren Cao, Zexiang Li, Li Qiu, Erwei Bai, Justin Chuang, Philip Chan and Kwan-Fai Cheung for their collaboration and critical remarks on various topics in fuzzy theory. Li-Xin Wang The Hong Kong University of Science and Technology