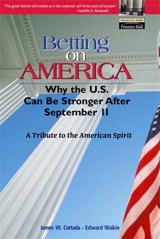 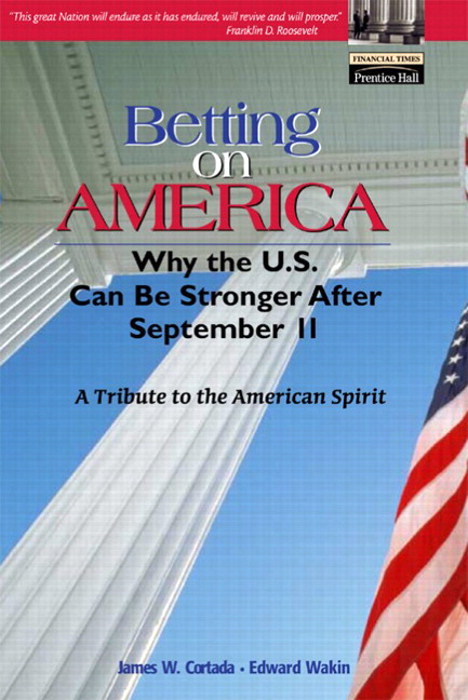 Betting on America: Why the US Can Be Stronger After September 11

Betting on America places the events of 9-11 in deep historical context, offering a thoughtful, realistic, and ultimately optimistic vision of AmericaÕs new future. The authors examine the long-term impact of 9-11 at every level, from our most private personal relationships, to our most crucial business decisions, to the choices we make as a society. They find in American history one overriding lesson: when we have been challenged, we have discovered deeper strengths and achieved more greatness than we had ever imagined possible.

After September 11: The Bumpy Road to a New Normalcy


1. The Bumpy Road To A New Normalcy.

3. Renewing Our Ways Of Thinking.


Weighing The Odds. Figuring Out A Response. The Challenge Of Knowing Thyself. Pessimism Versus Optimism. Looking To The Future.

4. Finding Our Way At Work.


What The New Normalcy Means For Business. The Changing Nature Of Work. Decentralization Of Work. The New Role Of Government. New Opportunities And Lost Causes.


A Nation Of Joiners. National Security And Homeland Defense. Getting It All Together. What To Do About Terrorists.

6. Forward On The Economic Front.


Leading The Way. A Business Case. A Leadership Inventory.

8. A National And Personal Agenda.


Fear Conquered And Things To Do. The Role Of Information And Physical Security. An Age Of Decency? An American Time, Some Final Thoughts.

For a generation, 911 served a special purpose for Americans as the telephone number we call to report a fire, to get an ambulance, to report a crime in progress, to get help in an emergency. As all Americans can never forget, September 11, 2001 became the day 911 took on historic meaning, when thousands of people were killed in a series of terrorist-initiated events that were breathtaking in scope: destruction of both 110-story towers at the World Trade Center in New York, a portion of the Pentagon in Washington, D.C., and the crash of an airliner in Pennsylvania. Soon, the United States and more than 100 other nations quickly mobilized an international response to neutralize terrorism. 911 became 9-11 for the entire world.

Globalized terrorism dramatized the global trends and developments that were already changing our world. All Americans felt (and were) both involved and endangered, realizing that there are no sidelines in the global environment created by technology. The two oceans that once felt like America's gigantic security blankets were shredded as we came face to face with the reality of an anyone, anytime, anywhere world-for evil, as well as for good.

Suddenly shocked into uncertainty, we reacted by feeling that nothing is as it was before. The nation and its people felt present shock and future fear, wondering what would happen next, feeling that anything could. In perspective, history sends a more complicated message. While much changes when a historic event overwhelms us, it is time to look much further and deeper, and to examine the relentless pace of change in our time. We know from prior experience that major events accelerate certain trends, cut off others, and speed up and slow down society-wide developments. In the 9-11 aftermath, what emerges is both predictable and unpredictable (the unintended consequences we so often hear about). Nations are forced to initiate changes long overdue and neglected. New circumstances bring to the fore opportunities that were otherwise dormant. As individuals, we are challenged to learn, to understand, to grow, and to rediscover our responsibilities-as well as to grieve.

This book examines the 9-11 trauma for trends and consequences for us as individuals and as a nation, and at exploring ways to confront, cope, and leverage these changes. Beyond the 9-11 trauma, we have lives to lead, duties to fulfill, work to do. We propose that Americans respond with a forward-looking approach. To do that, we must move beyond the uncertainty created by events that shake our world. To do that requires all of us to understand the changes already underway in our post-millennium lives, analyze the costs and benefits we are paying, and identify ways in which opportunities and change intersect. In short, we agree with the view that America-and the world at large-is confronting a new normalcy, one underway for at least two decades, but which has become urgently obvious as a result of 9-11. This new normalcy is neither simple to explain nor easy to adjust to or possible to avoid. We all must deal with it.

We come to this task with the view that history provides lessons and reminders from the past on what we face. Nor is history the only teacher. Social scientists have their insights, business managements their methods and responses, governments their policies, and technology its built-in imperatives. Together, they provide a holistic view of the changes underway, suggest where our nation may be headed, and show how individuals and organizations can cope and eventually thrive. While 9-11 will haunt eyewitnesses and TV viewers for the rest of their lives, it does not stand alone in history's catalog of horrors. As one 20th-century example, Britons alive today have childhood memories of the aerial devastation visited upon London in the early months of World War II. In our own history, the British invaded Washington, D.C. and destroyed the White House. During almost the entire Civil War of 1861-1865, residents of the capital feared invasion and destruction.

Our underlying premise is that we Americans can cope with what we are facing, but it will take effort, adjustments, and a proactive approach toward changes across the board. Not only will we recover and go forward, we will find opportunities in a changed world by drawing on individual, group, national, and governmental resources and values. Understanding what is happening and identifying what can and needs to be done is part of the coping process. As one of the founders of what eventually became General Motors, Charles F. Kettering pointed out, "The world hates changes, yet it is the only thing that has brought progress."

Over the years, your authors have observed how change occurs in American society in facing social issues and business challenges. One of us is a professor at a major university, the other an executive at a major corporation. We have spent decades analyzing and explaining trends and how to leverage them, ranging from the social and the political to the managerial and economic. As we observed the reactions of Americans, the media, and government officials around the world in the weeks following 9-11, it became clear to us that perspective and presentation of a go-forward approach were called for. Our combined experience suggests that the important challenge is to look behind 9-11 to confront the ways in which today's events and trends fit into a large mosaic, then to identify what we can do as individuals and as a nation.

The analysis and recommendations in this book are the product of a collaboration aimed at sorting out the rush of events. We recognize that there are many other blueprints to consider and realize that others will put forth theirs. What matters is the need to respond and to contribute to the process of confronting the new normalcy. The aggregate of thoughts and actions are a sign of American's strength and a potential source of workable responses. In terms of the national will to prevail against its enemies, every call to Americans to renew their lives and to resolve to fight terror strengthens our resolve. Nothing could be more American.

As to the book's origins, what has happened is so critical and potentially far-reaching that we felt impelled to put aside other writing projects to develop and put forth a constructive, rational perspective as part of moving forward. Our publisher and editor, Tim Moore at Prentice Hall, turned to his medium-publishing-and enlisted us in this project, earning our gratitude for his editorial support and guidance. The opinions stated in this book are, of course, ours, as is responsibility for its deficiencies, not Fordham University, IBM, or Tim Moore and Prentice Hall. We also want to thank the production team at Prentice Hall that worked so efficiently to bring this book to you in timely fashion.

Will It Fly? How to Know if Your New Business Idea Has Wings...Before You Take the Leap