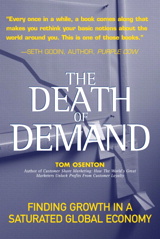 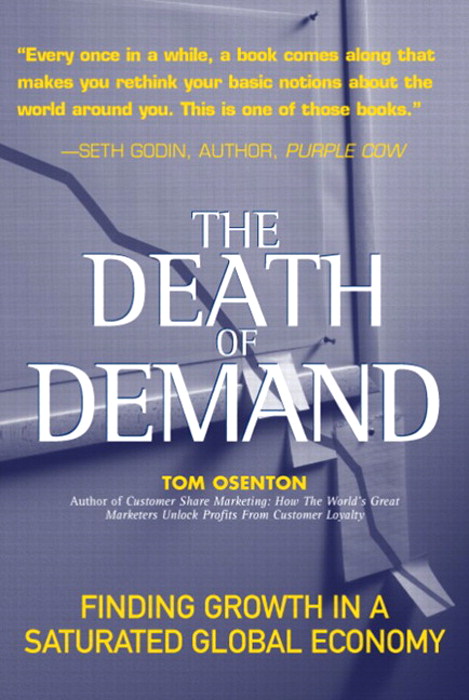 Death of Demand, The: Finding Growth in a Saturated Global Economy

Praise for The Death of Demand

"Every once in a while, a book comes along that makes you rethink yourbasic notions about the world around you. This is one of those books." --Seth Godin, Author, Purple Cow

We have more TVs than viewers. More phone numbers than talkers. More homes than households. More cars than drivers. Corporations have pushed for more, and consumers have gorged themselves ... and now they're starting to pull away from the table. Demand is dead. The culprit: the generations of managers at the world's greatest corporations who did their jobs so well they hastened the onset of saturation.

In The Death of Demand, Tom Osenton reveals that all successful corporations enjoyed 25 to 30 years of increasing rates of revenue growth coming out of World War II. Then all of a sudden it stopped--hitting a wall in the mid-1970s when revenue growth rates started decreasing. Corporations that once consistently grew at double-digit levels now more often post low single-digit revenue gains at best. And that trend won't change.

Starting with a foundation of clarity and realism, Osenton explains why all sectors of the economy--even technology--have already seen their best days, and why, for the first time ever, no sector of the economy is growing at increasing rates. Osenton sheds new light on the serious implications that lack of demand has on:

Corporations How will they adapt to the new economic reality that produces little or no growth? CEOs How can the 21st century CEO deliver long-term shareowner value with flagging demand? Shareowners Can they expect the value of their investments to increase with limits to productivity? Employees Will they pay for increased shareowner value with their jobs? Governments Can unemployment levels stabilize in an economic environment that lacks demand? Are we victims of our own success?

Consumers can only drive so many cars, eat so many burgers, and talk on so many cell phones. Mergers and acquisitions, zero-percent financing, and other temporary measures only hide the hard reality. In one industry after another, companies are coming up against inexorable limits on demand. Year after year, they're failing to achieve top-line growth targets, because those targets are simply no longer achievable--and now we know why.

In The Death of Demand, transformational management consultant Tom Osenton systematically demonstrates why the world is at the end of one long-wave business cycle and the beginning of the next. Osenton offers the first comprehensive understanding of one of the most important economic theories since demand and supply. The Law of Innovation Saturation dispels the myth of unlimited growth, and impacts every product, in every corporation, in every industry, in every economy in the world.

Is Market Demand the Lifeblood of Capitalism?


I. THE DRIVE FOR GROWTH.

1. The Lifeblood of Capitalism.


Life and Death. Not Just About Cheese. World Population Growth. World's Largest GDPs Hurting. The Basics. Rate of Growth: Trending Up or Down? Never Looking Back. The Inverted V. Ebbing Tide. Negative Rate of Growth. McDonald's: Not-So-Happy Meals. All Sectors Have Hit the Wall. Even Technology Has Seen Its Best Days. The Shrinking Big Three. The American Dream. Rationalizing the Doldrums. Conventional Remedies. When All Else Fails, Cheat. Hitting the Market-Share Wall. Victims of Our Own Success. Putting Earnings at Risk. The Culture of More.


Desperate Times. In the Beginning… The Most Fundamental of Fundamentals. Spin Doctors: Healthy Patients, No Matter What. Report Card: All A's on a Pro Forma Basis. Tricks of the Trade: Increasing Revenues. Extended Warranties. Penalties: Skies Becoming Less Friendly. The Obesity Factor. Lengthening the Sales Cycle. Have You Driven a Ford Lately? Bargain Basement Deals. Deflation: When Having Too Many Good Deals Hurts Everybody. Your Business Is Important to Us. Cutting Costs. Cutting Quality. Fabricating the Numbers. Restating Earnings. Timing Is Everything.

6. The Law of Limitations.

7. The Law of Innovation Saturation.


The Slowdown: Sign of Failure or Success? The Eternal Stairway. The Inverted V. The Law of Innovation Saturation. Every Successful Innovation Enjoys Two Major Trends. The Declining Rate of Growth Can Be Slowed, But Not Reversed. The Law Applied. Car and Truck Sales. The Airlines: September 11 Compounds the Problem. General Electric: Not Even Jack Could Break the Law. Even Technology Is on the Downside. Fastest Ride in History: Amazon.com. Corporate Progeria. Implications of Innovation Saturation. The Fading Business Cycle.


Getting Hit by a Two-by-Four. Great Expectations. Unrealistic Expectations. Living the New Economic Reality. Turning Four Business Basics Inside Out. Managing Expectations. A Time of Renewal.

There once was a man from Wales, Whose performance his boss mostly hails, One day he got canned, For lack of demand, His supply far outnumbered his sales.

When I was growing up in Boston in the 1950s, we had one telephone, one car, one television, and one turntable for playing LPs and 45s. The turntable and TV were actually both built into a large piece of dark mahogany furniture complete with hidden speakers—what must have been the home entertainment center of its day.

A half-century later, my own household has three cars, five telephones (not including three cell phones), three televisions, and eight different types of devices in which we can play our music CDs. We are oversized, over-entertained, over-informed, and definitely over-consumed. We have more than we need, more than we could ever consume, yet the call to arms from economists, business leaders, and government officials alike is "Grow, grow, grow."

We can't buy any more consumer electronic devices, we can't eat any more food, we can't drive more than one car at a time, or talk on more than one phone at a time, or watch more than one movie at a time. We are not broadband consumers. We can't expand our capacity for hamburgers, toothpaste, or shampoo, and there is no economic stimulus that will cause us to change our consumption habits for the long term.

The signs of saturation are all around us, but we prefer to characterize them as soft spots, or temporary periods during which corporations work off inventories. But it's more than that. Consider these statistics:

There are 15 million vacant homes in the United States—enough to house every family in Australia.

There are 31 million more registered vehicles than licensed drivers in the United States—enough to provide every man, woman, and child in Canada with his or her own car.

There are more than 310 million personal telephone numbers (residential and cellular) in the United States, not including business numbers—one for every man, woman, and child in both the United States and Australia.

We have more TVs than people to watch them, more telephones than people to talk on them, more homes than families to live in them, and more cars than people to drive them. We can buy a hammer and nails, rent a DVD, or buy a pound of ground beef at four different locations within five miles of our homes. For the first time in history, the law of demand and supply is being put to the test: Have we pushed consumption to the edge of saturation, unable to stimulate new demand at any price?

Why the sudden lack of demand and fear of deflation? Because over the last 100 years we have nearly exhausted the three variables of consumption:

Number of consumers. Not only has the world's population quadrupled since 1900, the number of people participating in each category of product has greatly expanded over the last 100 years. The emergence of the middle class in developed countries gave rise to hundreds of millions who entered product categories for the first time in the 20th century. Today, there's barely a product category in which the rich and poor don't participate as consumers together.

Frequency and volume. The amount of product consumed both in terms of frequency and volume has greatly expanded since 1900. The developed world rationed and sacrificed for the first 50 years of the 20th century. Since 1950, we have been on a consumption binge that borders on gluttonous. Obesity has reached epidemic proportions. Consumer debt continues to grow while the number of personal bankruptcies is at record levels, approaching 2 million additional families or individuals a year.

We killed demand by using our drive, ambition, and creativity to convince more consumers in more categories to consume more products more often and in larger quantities than ever before. Our relentless push for more has caused us to reach a destination that few, over the past 300 years, thought possible: saturation.

So now what? What lies ahead for corporations, their employees, and their shareowners? Will we continue to grow? Probably. But will we continue to grow at a rate to which we have become accustomed? Probably not. And therein lies the rub. We have all been operating in a new economic reality for quite some time now; we just didn't know it. We must start thinking about the next 12 years, not just the next 12 months, and how we intend to manage maturing corporations in maturing industries that provide little momentum to a maturing economy.

This is the new economic reality—a reality that requires businesses to consider the possibility of selling a relatively fixed number of units each year for the foreseeable future and without a whole lot of pricing power. In the new economic reality, the rate of growth of corporations—any corporation—trends UP for just one period of its life. After that UP trend— which often takes decades—the corporation's rate of growth trends DOWN. UP once and DOWN once—not multiple times as suggested by those whose Holy Grail is the short-term business cycle. The long-term business cycle—one that views results over decades instead of years or quarters—does not follow an "S-shaped" pattern. It follows an inverted or upsidedown "V."

Like the townspeople watching the naked emperor at the front of the ceremonial parade, few have had the courage to tell it like it is for fear of appearing stupid or incompetent, as the fairy tale goes. However, that doesn't mean avoiding the issue will make it go away.

In many ways we are the spoiled brats of capitalism, always expecting more. When we don't get more, we throw a temper tantrum. We also tend to not take serious the undeniable signs that suggest big fundamental economic problems are on the horizon. We have not yet realized the seriousness of the problem. On a recent front page of USA Today, the lead story trumpeted the approval of $87.5 billion to help rebuild Iraq. Directly under that story was an article announcing that the U.S. Department of the Treasury was redesigning the U.S. nickel. Do we have any clue as to how stupid that looks, and how much it shows that we are not yet serious about a fundamentally troubled economy?

The emperor is naked, and has been for years. It's now time to stop whining about it and accept the fact that what we have is a bearish economy for the foreseeable future. An economy that might require us to rethink our very purpose and, to redefine precisely what it is we mean when we say we are making progress