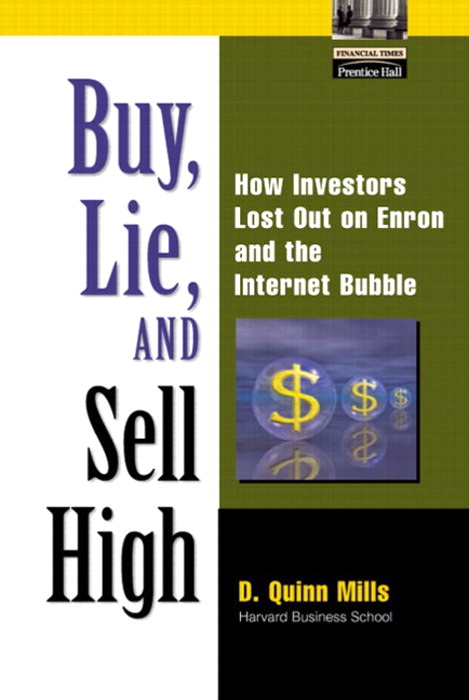 Buy, Lie, and Sell High: How Investors Lost Out on Enron and the Internet Bubble

In Buy, Lie, and Sell High, Harvard Business School Professor Daniel Quinn Mills offers the first systematic analysis of both the Internet stock bubble and the Enron scandal. Drawing upon extensive new research and insider interviews, Mills uncovers both systemic causes and outrageous misbehavior. He demonstrates how each link in the "financial value chain" failed, from venture funds to auditors and regulators. Finally, he offers practical guidance for investors and policymakers seeking to avoid the "next" speculative disaster.

The Enron Debacle: Where Does Responsibility Lie?


I. THE BUBBLE AND CAPITAL MARKETS.


Why This Book Has Been Written. How This Book Was Written. An Unusual Feature of This Book: Contributions from Others. The Message of This Book: How to Avoid Another. Bubble and How to Protect Yourself If It Occurs. Talking Point.

2. Destroyed by the Bubble.

II. HOW THE BUBBLE HAPPENED.


The Technology Bull Market. The Bubble. Why Did the Bubble Form? Day Trading and the Source of the Bubble. Other Bubbles in History. The Software Cycle. The Transfer of Wealth. Talking Points.

5. What it Meant to “Do the Right Thing” at Enron.

7. How Some VCs and Bankers Led.


Entrepreneurs in the Wrong Direction. Having to Go to the Venture Firms. Pressure to Spend. A Strategy's Limitations. Like Sheep to the Slaughter. Get-It-Right Instead of Get-Big-Fast. Talking Points.


Venture Capital. Rushing to an IPO. Exiting an Investment. How Their Own Rules Were Changed by the Venture Capital Firms. The Baby Goes Out with the Bathwater. Talking Points.


Whom to Back. Garden.com: A Mistake from the Get-go. Boo.com. Did the Venture Firms Make Money from the Bubble? Talking Points.

V. TAKING START-UPS TO THE PUBLIC.


Inflated the Bubble. The Banks Bend the Rules. The Investment Banks and Institutional Investors. Who Brought Those Duds to Market? Mass Hysteria or Fraud. The Blame Game. Mass Hysteria. What Did the Venture Firms Know? Did Wall Street Cross the Line? If You Can't Sue City Hall, Can You Sue Wall Street? Beware of “Buyer Beware”. Talking Points.

11. The Retail Investor: Victim or Fool?


The Buyers' Side of the Capital Market. Why Mutual Funds Got on the Bandwagon. Speculating with Pension Money. Momentum Investors in Disguise. Blaming the Investor: She's a Pig. How Important Is the Freedom to Speculate? Talking Points.

12. Influencing Factors: Where Does Responsibility Lie?


What the Accountants Should Have Done and Didn't. The Hype Machine. The Fed Was Also at Fault. Talking Points.

VI. THE ROAD KILL OF CAPITALISM.


theglobe.com. Not a Smart Thing to Do. Young People Succeeding Early. The Return of Big Company Values. Talking Points.


Creating a New Business Cycle. Economic Losses Caused by the Bubbles. Starving Entrepreneurs of Capital. Setting Back Technological Innovation. What Happened in e-learning. Meanwhile, in Germany. Another Wave of Internet Companies Is Coming. A List of the Economic Consequences of the Bubble. Insuring Public Confidence. Talking Points.

17. What Does the Future Hold?

Why This Book Has Been Written

I've written this book because of what happened to a friend of mine. She was in her 50s, and had painfully accumulated over her working life a nest egg. When she lost her job, she received the money in a lump sum. It was to help support her old age. She visited the Web site of one of the largest mutual fund companies and studied the performance record of the 15 or so funds they offered for annuity contracts. She identified those with the best returns. She then called a representative at the company to ask about an investment. He told her that she had picked the two best funds, just what she should do, and he arranged for her to make the investment. She now had an annuity contract with the mutual fund company with her capital invested in a single fund.

Three months later the fund began a rapid collapse. She called the company and was told that the decline was temporary, and that the proper long-term strategy was to remain invested. She did, and the fund fell to about 30 percent of its level at which she had bought it. It turned out that the fund had been heavily invested in Internet stocks.

"Why did I lose my money?" she asked me. "Why was my pension money invested in such speculative stocks? Who got the money I lost?"

How This Book Was Written

So a small team and I went to work studying the great Internet bubble. We looked at the various players who were involved in the process by which venture funds and entrepreneurs built companies, and then with the investment banks, took them public. We made a list of how the venture funds changed their investment criteria as the bubble developed, and how investment banks changed their criteria for taking firms public. We looked at how the mutual funds shifted their investment criteria so that many funds became loaded with dot-com and telecom stocks. We looked at Alan Greenspan's warnings, and at the inflation and then bursting of the bubble. We looked at who made money in the outcome, and who lost.

We have read the literature on financial manias and explored the explanations being given for the recent bubble. The key explanations are that (1) it was an accident: A group of forces came together like the perfect storm—new technology, an affluent investing public, and a booming economy—and then blew themselves out; (2) it was engineered: The incentive structures in financial service firms made their blowing up into a bubble a certainty; (3) it was a result of inexperience: Investment professionals (including the business press) were young and inexperienced, and believed that the New Economy was qualitatively different from the Old Economy so that valuations weren't recognized as inflated; and (4) it was another example of the madness of crowds—individual investors were prone to mass hysteria and didn't do their homework and so drove stock prices to unreasonable levels, and when the bubble burst, got what they deserved.

We also asked whether or not the entrepreneurs, venture firms, investment banks, brokerages, and mutual funds really thought that the companies they sold the retail investor were legitimate firms; and we looked at the litigation now underway about how IPO sales were conducted.

We asked whether or not a bubble was a necessary consequence of the operation of our free markets—the way western economies raise capital to fund technological innovation? Or, alternatively, whether the bubble was a dangerous aberration that should be avoided if possible?

Our research convinces us it is the latter, so we asked what might prevent another bubble, or at least help protect retail investors from the worst ravages of one if it occurs.

We also looked at Germany, which had a somewhat similar bubble in Internet stocks, but with a very different outcome for small investors, and asked why. In this book, several times we provide German examples of what happened in the Internet bubble; they provide important supplementary material showing how the bubble leapt international boundaries, and how its elements were often the same but sometimes different. But in this book, to avoid confusion we usually are talking about the American experience, except where Germany is explicitly cited.

We were fortunate to find many knowledgeable people willing to talk with us about the bubble. Some were willing to do so for attribution; others were unwilling to let themselves be identified, in part because litigation about events during the bubble is gathering force today, and many people are either involved in or hoping to stay out of the legal fray.

Regardless of whether or not people were willing to be identified in print, they provided us with an ongoing dialogue from which this book emerged. It's the hope of our research team that readers will engage their own friends and acquaintances in a discussion of the important issues which arise in this book. To encourage such a dialogue, we have provided a small group of talking points at the end of each chapter—not a summary of the chapter, but rather the key points that a person might want to take from it to a discussion with others.

An Unusual Feature of This Book: Contributions from Others

An unusual feature of this book is that it includes short contributions from people other than the author and his team. Several American and German participants in the bubble have consented to give their experiences and their views about the issues with which this book is concerned, so that this book provides a forum within which some of the players in the Financial Value Chain can discuss what occurred during the bubble. Sometimes contributors to this book don't agree with the author, but differences in opinion will help the reader make up his or her own mind about what happened in the Internet financial mania and what it means for each of us.

The Message of This Book: How to Avoid Another Bubble and How to Protect Yourself If It Occurs

From our inquiry, we've developed a set of suggestions as noted in Chapter 16, "Reforms to Protect Small Investors," about how entrepreneurs and investors can help avoid another bubble or protect themselves from it if it occurs, including proposed regulatory reforms that would provide much more protection for investors in the event of another bubble.

Many investors took heavy losses during the Internet bubble. How did that happen and what, if anything, should be done about it?

The Freelance Consultant: Your comprehensive guide to starting an independent business