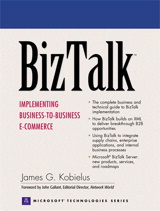 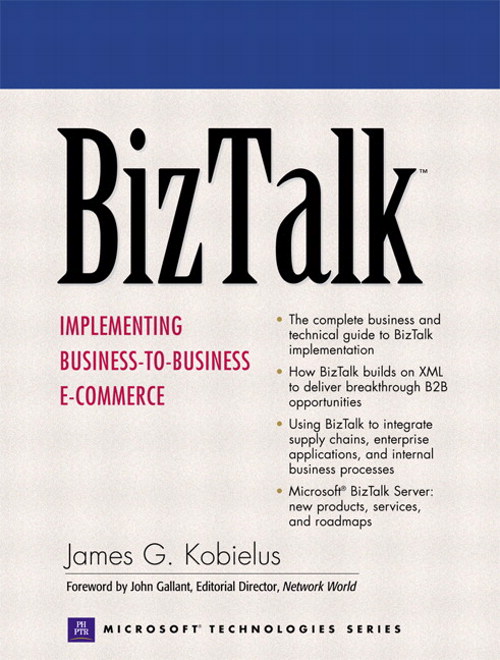 BizTalk, Microsoft's strategic e-commerce initiative, enables companies and industries to develop and evolve sophisticated e-marketplaces far more easily than ever before. In this authoritative, realistic book, leading e-business consultant James Kobielus walks you through every issue associated with BizTalk deployment-business and technical. You'll find specific, up-to-the-minute answers to the questions every decision-maker is asking about BizTalk:

Kobielus reviews each key BizTalk scenario in detail: hubbed marketplace integration, extranet supply-chain integration, and enterprise application integration. He introduces the latest commercial BizTalk-enabled products and services, and evaluates Microsoft's strategies for rolling out BizTalk offerings as server-based software and as portal-based services. Now's the time to understand BizTalk-and this is your business-focused, start-to-finish briefing.

How Does BizTalk Fit Into the Microsoft.NET Initiative?

How Does Biztalk Relate to EDI and Workflow?

What Is BizTalk Server 2000's Role in Microsoft's E-Business Architecture?

What Is the BizTalk Interoperability Framework?

What Is the Biztalk Philosophy?

What Is the Potential BizTalk Role in E-Marketplaces?

2. How Does BizTalk Differ From Other E-Commerce Frameworks?

3. What Are the Fundamental Technologies Behind BizTalk?

4. Who's Supporting and Implementing BizTalk?

5. Five How Open Is the BizTalk Framework?


Microsoft's Familiar Approach to Implementing Open Standards. What Does “Open” Mean Anyway? How Does the BizTalk Initiative Measure Against These Criteria of “Openness”? In Summary.

11. Other Microsoft Commerce-Related Products and Services.


What's XML? What is XML's Role in Microsoft's Products? Summary.

We live in the most dynamic, productive, and innovative society the world has ever known.

Today's economy pulses with electronic vibrancy. We have created an engine of nonstop wealth generation, drawing power from the flow of cheap, easy, instantaneous transactions on the World Wide Web. In the few short years since we first commercialized the Web, this new mass medium has become a familiar presence in offices and households worldwide. Millions of us are venturing out onto the Web to browse for goods and services. The thought of transmitting our credit card numbers to a merchant's distant server no longer seems so scary. Buying online has become so commonplace that we hardly think twice anymore. E-commerce is simply how we shop and work in this new millennium.

Electronic marketplaces are the backbone of our new economy. We are all familiar with business-to-consumer (B2C) e-marketplaces, in the form of mass-market portals, online retailers, auction sites, and the like. Just as important are business-to-business (B2B) e-marketplaces, which build upon companies' long experience with electronic data interchange (EDI) and provide various Internet-based commerce services tailored to the needs of particular industries. Trading partners may establish B2B connections through online intermediaries, often called commerce "hubs" or "exchanges," or through secure "extranets" implemented between their respective internal networks. However implemented, these are environments where dozens, thousands, or millions of buyers and sellers can meet to transact business.

E-marketplaces rely, of course, on networks, software, and the technical wizardry that keeps it all operating around the clock, day in and day out, across all trading partners. But what makes B2B e-marketplaces really tick, down deep, are agreements on the ground rules for transactions among trading partners. This is where B2B trading environments build on traditional EDI, with its emphasis on secure, guaranteed, electronic delivery of standardized business documents. This is also where Microsoft's BizTalk initiative fits into the world of B2B e-commerce.

The beauty of BizTalk is in the simplicity of the concept and the richness of its potential B2B applications. At its core, BizTalk defines a standard electronic message "envelope" for routing e-commerce transactions between companies. You can transmit this BizTalk message over standard e-mail systems, over the Web, and over other underlying network "protocols." You can process this BizTalk message over any operating environment, using programs developed in any computer language, without the need for sending and receiving applications to be online at the same time or otherwise in direct communication.

The details of Microsoft's multifaceted BizTalk initiative are the substance of this book. Microsoft has defined an ambitious roadmap for its own products and services that implement the BizTalk "framework." However, BizTalk is not just limited to Microsoft's offerings. Indeed, BizTalk will have failed as an industry initiative if Microsoft doesn't enlist a broad range of other software vendors and service providers to implement its technical framework.

BizTalk: Implementing Business-to-Business E-Commerce is a business book that will help you think through a host of management and technical issues before investing precious corporate resources on BizTalk-enabled products and services. We have developed this book primarily to serve two groups of professionals:

We have organized the book into four principal parts, each of which consists of several chapters.

Part One discusses BizTalk fundamentals. What is BizTalk? What value does BizTalk contribute to e-commerce? Who developed, manages, and oversees the BizTalk initiative's many facets? How does BizTalk differ from other e-commerce initiatives? Which vendors are implementing and supporting BizTalk? What are the basic standards and technologies behind BizTalk? How mature are BizTalk-compliant products and services? How open is the BizTalk Framework?

Part Two provides a comprehensive overview of BizTalk applications in B2B e-commerce. Most of the discussion addresses potential applications, since Microsoft had not yet released the commercial BizTalk Server 2000 product at the time this book was written. We describe three integration scenarios into which enterprises and service providers will deploy BizTalk Server 2000:

Part Four discusses the various technologies, standards, and products that support a full deployment of BizTalk Server 2000 in a corporate or service provider network. In particular, we discuss the following BizTalk-related topics:

We also provide a comprehensive glossary of technical terms that appear in the book. You will find this book an invaluable resource in high-visibility e-commerce integration projects over the coming years. BizTalk-compliant products and services will become widespread in B2B projects in the near future, riding on the coattails of the popular Windows 2000 operating environment.

The bottom line is that if your boss doesn't ask you to get up to speed on BizTalk, before long your trading partners almost certainly will.