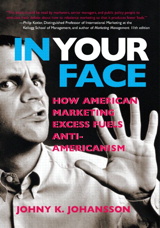 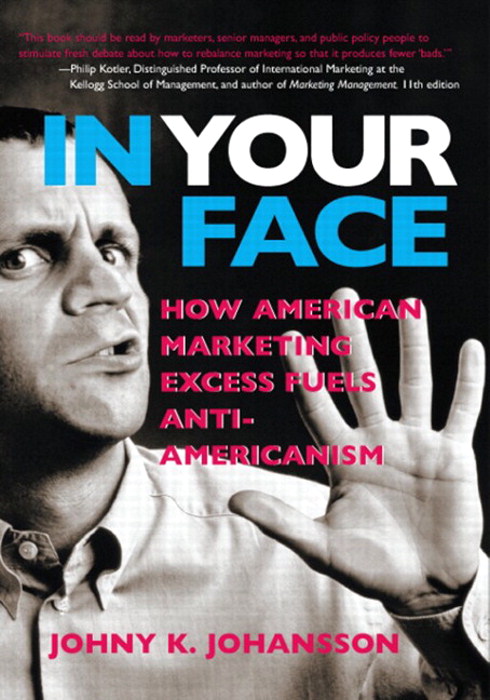 In Your Face: How American Marketing Excess Fuels Anti-Americanism

Globalization, commercialization and Americanization are changing the lives of almost everybody on the planet. The uniqueness of this book is that it tackles these trends together, and head-on. The balance of knowledge and feeling makes it an important book in a field plagued by one-sided pro- and anti- pieces.–David Arnold, author of The Mirage of Global Markets

Millions of people around the world have come to despise the United States. One of the biggest reasons is American "in-your-face" marketing, which treats people everywhere as 24 × 7 consumers, drives U.S. free market materialism at the expense of local values, and seeks to "McDonaldize" the entire globe.

In this book, one of the world's leading experts on global marketing steps back to see its true impact. Johny K. Johansson looks at American marketing from the perspective of the non-U.S. consumer: as the first wave of a cultural assault by an arrogant, wasteful society of overfed, gas-guzzling, SUV-driving bullies.

Johansson considers the Bush administration's "repositioning" of America and the post-9/11 collapse of American popularity from the perspective of a professional global marketer. He then offers practical guidance for marketers who wish to succeed in global markets without becoming "ugly Americans."

In Your Face reveals the new worldwide rebellion that's brewing against American marketing. Renowned international marketing expert Johny K. Johansson explains why global customers will no longer put up with the traditional tactics of western companies. Most important, he offers a new path to sustainable profits–a path based on respect, not domination.

Along the way, Johansson shows why American brands are especially susceptible to attack, how global politics is reshaping the playing field for U.S. companies, and how to overcome the hidden "one-size-fits-all" ethnocentrism that's fatal to marketers abroad.

Why Do Marketers Do What They Do?


Early Stirrings. The New Anti-Marketing. Brands as Weapons. Being "In the Market". Crowding Out. From Consumer to Citizen. The New Brief.

3. Why Do Marketers Do What They Do?


In-Your-Face Logic. The Marketer's View of People. The Empowered Consumer? Marketing Know-How. Competitive Pressure. Marketing as Warfare. Damned If You Do…

6. Why Only American Brands?

8. Who Wants to Be American?

9. Are Foreign Countries Any Better?


Most Commercialized? The European Picture. Way of Life. Patriotism. Marketing Religion. Your Choice.

This book started as an investigation into the complaints againstmarketing in the anti-globalization movement at the beginning of the newmillennium. Not only did anti-globalizers attack sweatshop practices,child labor, and environmental degradation in third-world countries,they also denigrated the global brands I used as examples of good globalmarketing in my Master's of Business Administration (MBA) courses. Booksappeared deploring the "McDonaldization" of society, and self-proclaimedanti-marketers advocated the boycott of leading brands. Young teenagers,including my own two daughters, refused to buy leading brands carefullytargeted to them using our most advanced marketing techniques.

My daughters made me think. While I was touting Nike in class as agreat example of global outsourcing and brand building, my own daughtersparticipated in anti-globalization demonstrations against the brand.Starbucks, the globalizing chain of coffee houses, was picketed becausetheir strategy of blanketing neighborhoods with Starbucks outlets forcedlocal cafes out of business. The Gap, Disney, and McDonald's, iconicbrands for us in marketing, were disparaged, or "dissed," in chat roomson the Web. This needed some explanation.

But as America turned the war on terrorism into a war PIon Iraq, and inthe process lost the support of its allies, the anti-globalizationmovement turned first into an anti-war movement, and then into ananti-American movement abroad. And now marketing issues seemed relevantagain. For one thing, the rhetorical style of the Bush administration'swar campaign very much resembled the in-your-face communicationstrategies common in American marketing. In addition, the unilateral wartalk removed any foreign inhibitions against attacking America and itsbrands, reawakening the animosity toward globalization. The Americanswere the main proponents of war, and they were also the main proponentsof globalization. Anti-Americanism and anti-globalization seemed twosides of the same coin, and marketing surely played a common role inboth movements. Exploring this role seemed important. I got back to thebook. This is the result.

Opting In: Lessons in Social Business from a Fortune 500 Product Manager